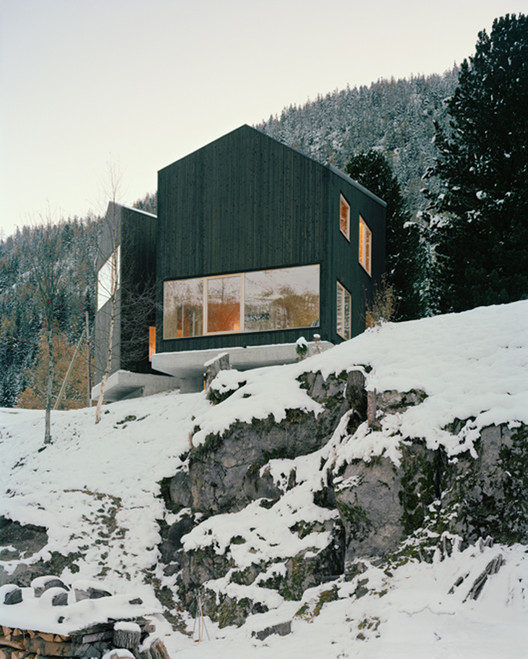 Text description provided by the architects. The house in Les Jeurs, a hamlet above the road to the Col de la Forclaz, is a project that picks up on local memory by working with the form and scale of the neighbouring traditional buildings.

Like a Valais-style “raccard” (a hut for storing grain), it consists of a stone base on which a volume made of wood is elevated above the ground. Since the construction of a closed, large volume would have disturbed the harmony of scale, the building is divided into two parts. They are connected by the entrance on the mountain side and are separated by an angle of 45 degrees towards the valley.

From the mountain side, one sees only a single silhouette in the form of an M, resembling a mountain, while on the valley side, the view of two volumes raised from the ground presents itself in a way that recalls typical children’s drawings of houses. Two large windows, one in the living room on the ground floor and the other on the first floor, allow the landscape to enter the building. The two windows are opposite each other on the two façades, creating a visual reference between the two sections of the chalet.

The structure made of untreated fir wood (which is clad in tinted larch wood), the concrete floor plate above a half-sunken basement and the interior space, which is divided into small-sized elements that play on the different heights, are all characteristics that give the project an appearance that is closely related to traditional mountain huts.