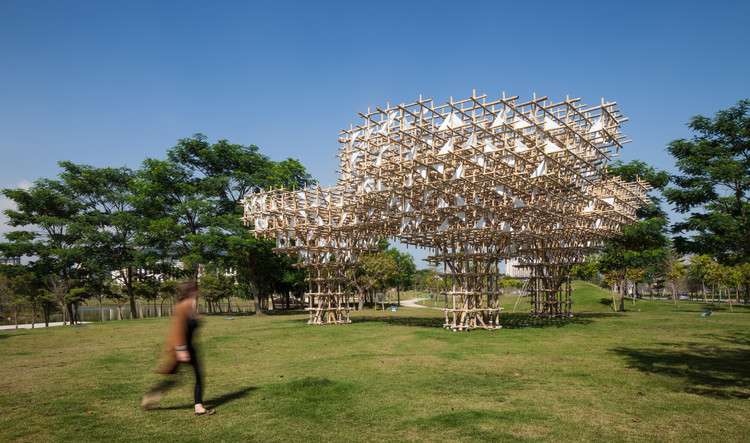 Text description provided by the architects. Macau Architecture Promenade (MAP) pavilion is the result of a worldwide open call for artists, launched by BABEL cultural organization. From more than 50 proposals from all over the world, BABEL has selected the large-scale architectural pavilion by Impromptu Projects (João Ó and Rita Machado).

This temporary bamboo structure attempts to address the enactment between the citizens and the urban landscape. It is our conviction, as designers and reflective practitioners that urban density does not mean living in a concrete and hard environment. We need to educate, sensitize and cultivate other forms of activating the realm of urbanity, as a way to suggest possible roles within the nature of public space.

This temporary bamboo structure, entitled “Treeplets”, attempts to mimic the splendor and rarity of identical triplets in the form of three random trees, hence the word play of the title. The trees are joined together through their canopies, enabling the creation of natural archways and provide the structural solidity of the whole installation. Given its sheer size, it is a public space intervention which aims at activating the outdoor activities of the local community at various levels:

-The most basic and functional aspect is to give shade in an outdoor environment;

-As a consequence of the previous reason, it creates the favorable conditions for anyone (local residents or tourists) who passes by the temporary structure to rest, catch their breath while strolling, and at the same time appreciate the surroundings;

-Promote the local bamboo craftsmanship with contemporary proposals that surpasses their usual practice, which is the scaffoldings in the construction sector;

-To serve as a meeting point and an unexpected mark in the urban arena.

Initially, we envisioned the structure to be installed in an urban setting, conveying the need to address pressing issues which involve the nature of public space within the realm of high-density urban landscape. Despite these strong intentions, we were suggested a new location which was the New Campus of the University of Macau in Hengqin Island, a newly reclaimed zone covering an area of approximately 109 hectares (1.09km2). The campus design has a garden-style layout, in which the building blocks – mostly five-storey high – are generously spread throughout the island and in-between is a vast green area intertwined with a continuous lake, giving pleasurable sense of dwelling unconstrained.

After scrutinizing the various possible locations, we decided to place the structure in the middle of a spacious and empty lawn surrounded by medium sized trees to act as a physical and real comparison to the newly installed and artificial ones, hoping to attract the attention of the students and teachers who had to cross the garden in their daily affairs and maybe take this opportunity to enjoy the shade offered by the canopies. The proximity to the lake also brought a fresh relationship to the outdoor setting. The total area occupied by the intervention is around 200m2 with a height of 5,40 meters. However, the footprint of the trunks (columns) presented as a cross-shaped figure occupies only 1,40m2.

Treeplets was erected within 10 days and disassembled within two working days. The number of bamboo skilled workers hired to complete this particular job varied between three and seven. The quantity of bamboo scaffolding used to erect the canopies of the final structure was about half. In order to raise them, the skilled workers had to construct a scaffold, more precisely, a spatial grid from the ground level. During the assembly process, the void that we now see as the archways and the outer canopies was densely occupied with bamboo scaffolding, indistinguishing the final structure from its scaffolding. Indeed, the magical moment of the assembly happened when the scaffolding was taken down and the final shape revealed itself, as if the clouds gave way to sunshine and everything became clear and illuminated.

The bamboo scaffolding is an ancient technique introduced in the building industry of Macau and Hong Kong right after the colonization period. Nowadays, it is still widely used to skirt up the sides of the skyscrapers. Most of the bamboo poles used in the construction of scaffoldings belong to the species Bambusa tuldoides Munro, native of Guangdong province, in the southern of China. The scaffolds are formed by one or two grids of bamboo poles, in which the horizontal and upright poles are braced by crisscrossed diagonal ones. Thin strips of nylon plastic are used to bind the poles.

Treeplets utilizes the traditional technique of bamboo scaffolding verbatim. It is formed by a spatial grid of 60x60cm with bamboo poles varying from 6 meters long to 1 meter with diameters between 5 and 7cm. The columns are braced by crisscrossed diagonal poles that stretch to the outer limits of the canopy, with diameters of 8 to 10cm. These diagonals are also applied at the rooftop of each tree. The joints are tied with white nylon strips to enhance the sculptural quality of the structure, being that the batch had to be specially ordered with a minimum quantity to avoid the usual black color.

Despite the rigid, rational and modern pixelization effect of the spatial grid, the span of the canopy was in fact inspired by the traditional Chinese roof construction. As an example, in the construction of the ancient temples and palaces, timber skeletons are the main supporting frame of the ceramic tiled roof, whose weight is then transferred to the column – the timber post. Moreover, on top of the column is located the ingenious carpentry technique consisting of a bracket set that allows the wide overhanging eave, in which the rigidity is accomplished through interlocking and cross elements without the need of nails and metal rods.

The bracket set is a key feature in the design of this spatial structure as it builds up the vertical support and extends outwards in steps from the main column – the cross-shaped tree trunk – to achieve a certain height, eventually joining with the other bracket set from the neighboring structure and ultimately making an archway.

Most of the materials utilized in the construction of this temporary structure were intentionally chosen for their recyclability qualities: on one hand, bamboo poles were taken from the scaffoldings of the building industry and returned to its original function once the structure was dismantled; on the other hand, the triangle-shaped fabric that served as decorative foliage on the canopy were in fact recycled PVC fabric from outdoor banners. Therefore, the transformative process of the materials were equated in the design as it proposes the reutilization of the sources by creating something new out of the current society of the spectacle.

By using the bamboo scaffolding as an actual building material for the development of temporary structures within the public realm we are making a statement, which is to complement the city with its ancient constructive methods, bringing a sense of belonging to the local community and, thus, advocate the continuity of collective memory. 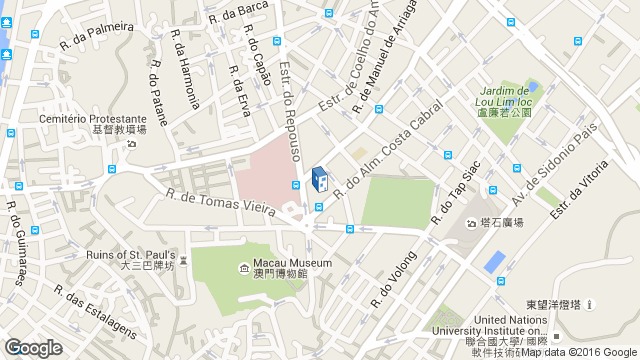 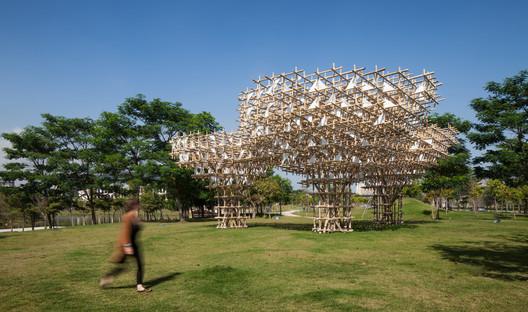