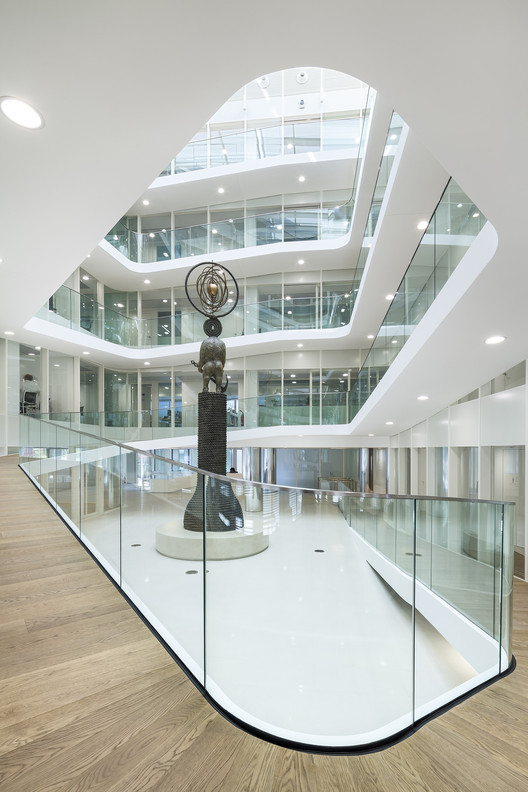 Text description provided by the architects. The exceptional natural setting of Suresnes – an undulating landscape, like an amphitheatre – orientates the town towards the river Seine and the Bois de Boulogne. The enviable site boasts an intensely vibrant urban area, with views right across Paris and up to the towers of La Défense and beyond.

The fairly recent development along the banks of the Seine comprises a wide range of typologies, from suburban housing (an area know as the ‘village anglais’), to higher, more modern buildings.

Pacemar SAS, holding company of Louis Dreyfus Armateurs, purchased one of these modern blocks, built in 1989. The building is part of a homogenous ensemble giving onto the Quai Gallieni that sits between Rue du Bac and Rue du Port-aux-Vins.

The original building, some 4,300 sq m built in reinforced concrete with a column-and-beam structure, was designed over six levels: an 88-place underground car park, a ground floor, and four upper levels. The ground floor was triangular in plan, and the three intermediary levels T-shaped, formed by two approximately perpendicular bars. The fourth floor was restricted to a single bar, orientated north–south and opening onto a large terrace. Plant rooms housed technical equipment on the roof terrace above.

The project brief was to restore the building and reorganise office spaces to meet the needs of the services and staff within the Louis Dreyfus Armateurs group. Redesigning and renovating workspaces in existing buildings can substantially minimise their environmental impact by upgrading their energy efficiency, use of technology and architecture.

Close analysis of existing, possibly dilapidated buildings, study of their future use and their conversion rather than their destruction, form the premise of sustainable development.

This renovation project demanded a technical approach, using efficient simulation tools: digital models and simulations of energy performance. An acceptable level of energy efficiency was achieved by means of a thoughtful, ‘made-to-measure’ approach in upgrading to contemporary standards

For this building, it was important to underline, via a new architecture, the value of recent heritage, and to provide sustainable solutions with regards to the organisation of workspace. Without either excluding or eradicating the original structure and morphology of the building, our project gave it a new image, ushering in modernity. The architectural intervention was based on three principles:

Firstly, a reorganisation of the floorplates into fluid, efficient spaces bathed in natural light, around a vast atrium and an internal courtyard cut out of the overweight interior created by the original form of the building.

Secondly, the provision of generous circulation spaces, visible and with good natural lighting, which promote accessibility and exchange within the building.

Thirdly, the design of a new facade, which ensures an efficient thermal and acoustic envelope while maintaining transparency and impressive views over the exceptional surroundings.

The original form of the building allowed us to reinvent its architecture. Its new image derives from restraint and simplicity, and from the consideration paid to the needs and desires of those who use it. Time was spent on identifying each of the main internal elements: principally the entrance hall, extended by the atrium and ramp, then the model room, office spaces and circulation, the cafeteria and spaces for relaxation, each of which we treated individually.

The general principle is of workstations within open-plan spaces. The sinuous spaces express the organisation of Louis Dreyfus Armateurs’ various services as areas, aiming to spatially regroup the services, or at least to bring them closer together, to form functional, more efficient hubs.

The design of these workspaces uses raised flooring and transparent partitions to provide a flexible spatial organisation that can be modified at minimum cost and with no loss of comfort. Two types of workstation are provided, open plan, and enclosed within a glazed office. Each desk is made of a standard worktop, or an enlarged worktop for studying plans of ships or marine maps, a computer, and a storage unit. The flexibility of the fit-out posed numerous technical implications in terms of acoustic insulation, air renewal, electrical equipment, efficient lighting and transparency.

Shared support, meeting or assembly spaces have been provided on each floor, fitted with audiovisual and teleconference equipment and acoustically insulated. A boardroom and multi-purpose training room complete the brief. The atrium and the courtyard provide two necessary openings at the heart of the spaces, where natural light was lacking.

The courtyard was born of the need to bring daylight into the heart of the entrance hall and as a mark of kindness to the residents of the ‘village anglais’ by stepping back on the two upper levels. The new facade is a reflection of the company’s maritime vocation. The object is to promote the identification of the company and to create an architectural landmark. Its design and that of the atrium and the courtyard ensure maximum transparency and natural light for the work and circulation spaces, which comprise the main elements of the building.

The glazed double-skin facade, naturally ventilated, ensures the thermal and acoustic insulation necessary at this proximity to the busy Quai Gallieni. Between the two glazed surfaces, blinds with adjustable slats provide optimal solar protection. Openings enable cleaning from the inside.

Finally, as its topography is characterised by an important difference in height, the widely visible roof of the building was designed like a fifth facade in order to conceal the technical equipment it houses. 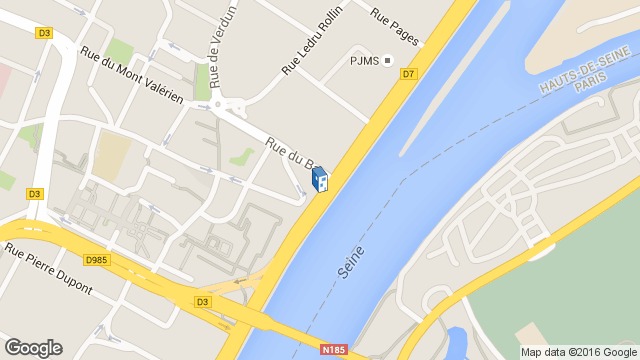 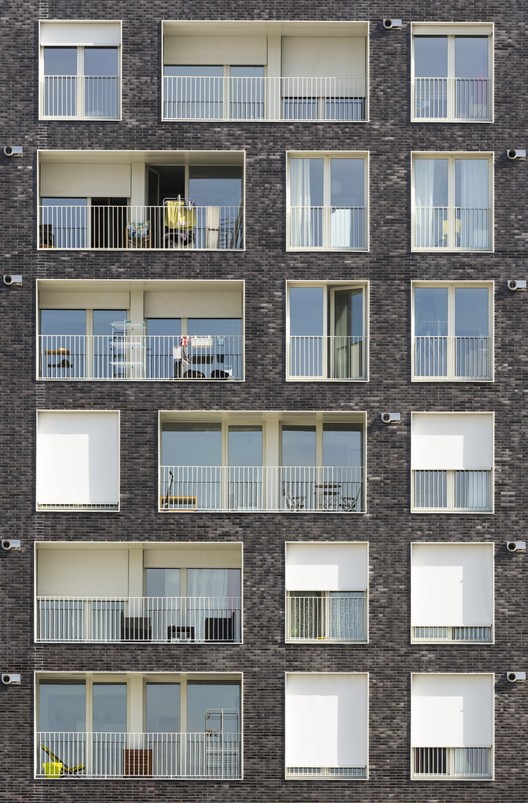