Santiago Calatrava has been commissioned to design a trio of bridges in the Chinese city of Huashan, east of Wuhan. The three steel bridges - Xihu, Xianbi and Lincong - will span 1.5 kilometers of the city's new Yangtze River canal, providing access to pedestrians, cyclists and vehicles.

“Architecture is one of the art forms best able to improve and revitalize cities both artistically and functionally,” said Calatrava. “The Huashan project is a clear example of how an urban element, key to the successful growth of the city, can at the same time improve the quality of life for its citizens, thanks to an integration of all three bridges and the creation of boulevards on the banks of the canal.”

The central Xianbi Bridge will stretch 129-meters and provide two lanes of traffic. It will be supported by central 42.3-meters-high arch that creates a "characteristic void," says the architect.

The westernmost, 102.7-meter-long Xihu Bridge will be supported by a single 20.4-meter arch that connects to the bridge via "a platform of inclined corrugated cables."

To the east, the 118-meter-long Lincong Bridge will feature two arches jetting outward from its center, reaching 26-meters-high.

"All three bridges have a pedestrian stairs allowing pedestrians to cross the channel directly from the lower level.Construction is anticipated to begin in late 2016," says the practice. 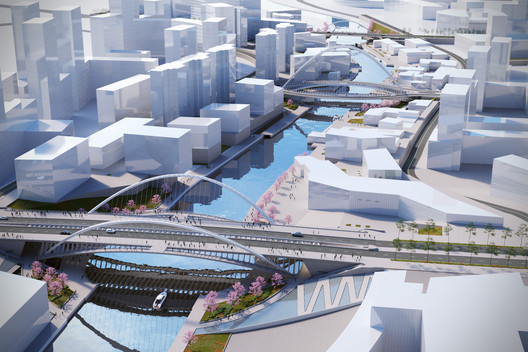