Save
Moscow's Urban Movement: Is There Hope for a Better Future?
Share
Or
Copy 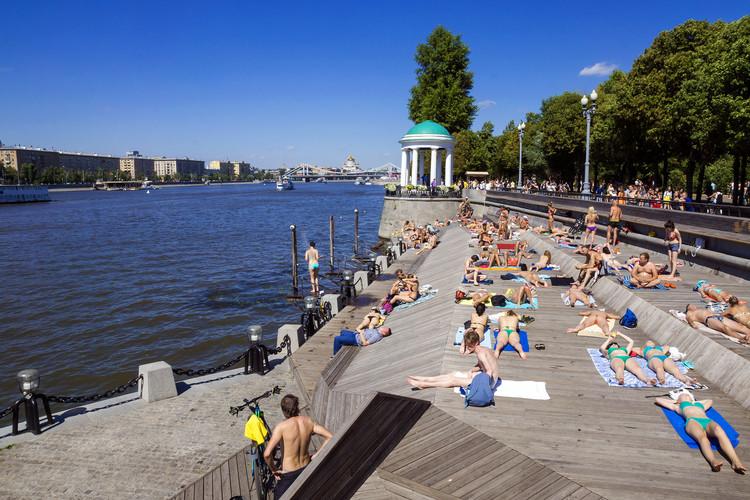 The regeneration of Gorky Park was followed by a flurry of changes. The city began to invest intensively in the development of other Moscow parks (by 2015, 240 new parks had been opened, 160 of which were in residential areas), in cycling mobility and infrastructure (by 2015, 241.7 kilometers of cycle track and around 10,000 bike parking spaces had been installed), and in street design and refurbishment (to date, 50 streets and squares have been repaired and 72 pedestrian zones created). Pedestrians are now the priority user group in the urban environment.

The work undertaken in 2015 has been more than impressive in its scale: sidewalks have been widened; 30,000 trees have been planted; 10,000 unauthorized advertising structures have been demolished; the facades of 943 buildings have been repaired, 178 hectares of lawn have been replanted, and 1.1 million square meters of flowerbed have been arranged and planted.

The redevelopment of Krymskaya embankment, completed in 2013, is one of the most successful projects to be implemented in recent years. In accordance with the design by Wowhaus Architecture Bureau, the embankment was completely pedestrianized. Cycle paths were demarcated and later became part of a single 8 kilometer cycle track along the Moskva River linking the Pushkinskaya, Andreevskaya, and Vorobyovskaya embankments. The historical identity of the area was also taken into account: artists have sold their work on the Krymskaya embankment since Soviet times; in light of the tradition, a covered wooden arcade was built to accommodate them. Nearby, a summer cinema and a lecture theater have sprung up. Meanwhile, plentiful benches were installed, along with an open fountain which has become a favorite spot for both locals and tourists.

Triumfalnaya square, which opened in its new guise in September 2015, is another successful urban project. As part of the reconstruction, vehicular access to the square was blocked, the street-level parking was removed, and the section of road from the Garden ring onto Tverskaya Street was closed off. The concept, by the architecture studio Buromoscow, was selected as part of a competition which attracted over forty entries. The design also included new trees, swings, and benches, as well as pavilions where residents and tourists might buy tea, coffee and a newspaper, or find out information about the city.

Despite the obvious positive dynamic - Moscow's gradual transition from a city of disconnected “islands” with a closed, unfriendly urban environment to a European style city where pedestrians are the priority user group - there remain a plethora of issues.

Yes, Moscow is continually holding round tables, forums, and discussions of its future urban development. Yes, it can now be said that the government has long-term planning objectives and a concept for how the city ought to look in three, five or ten years’ time.

And yet - despite the involvement of world class experts such as Jan Gehl, Renzo Piano, and Diller Sconfidio + Renfro, despite the numerous architectural competitions involving a jury, the expert community, and the citizens themselves - the quality and implementation of this city-scale project leaves much to be desired.

A good illustration of this is the Moscow government's ongoing program "My Street," which is intended to improve Moscow's public spaces. The project sets aside 100 billion roubles for the redevelopment of 4,000 streets by 2018. Nevertheless, the quality of the work carried out over the summer of 2015 (scheduled for completion in time for the Moscow City Day celebrations in early September) was far from ideal. After the hurried redevelopment works, it was hard not to notice the high, unwieldy curbs, the drains appearing unexpectedly in the middle of cycle-tracks, the tarmac laid on top of paving slabs, or the paving slabs laid on top of tarmac.

Often, an important date (such as the 2018 FIFA World Cup or City Day) is the best motivation for civil servants to get things done. But should it be that way?

There is a flip-side to chasing after statistics. Firstly, quality of execution suffers. Secondly, the choice of contractor and the professionalism of the people hired to supervise and implement the work leaves much to be desired.

The absence of professionals with the skills, experience and enthusiasm to finish a project to a high standard is becoming increasingly apparent. The contractors' main concern is currently to finish the work as fast as possible (usually to a low standard) and pick up their pay check. Companies rarely invest in skilled personnel, preferring to hire cheap labor.

The winners of architectural contests should be permitted, at a legislative level, to supervise the realization of their spatial development concepts. If this is not done, then contracting organizations will continue to profiteer and to alter concepts at the master-planning stage, condemning the original designs to remain mere ideas, a collection of pretty architectural renders in the official documentation. If third parties continue to oversee work, as opposed to the authors of the concepts, then the question must be answered: how will the quality of future projects be guaranteed?

There is no doubt about the mayor's desire to invest in the visual face of Moscow and to improve the city's quality of life. Yet the need remains for a more careful approach to project implementation and to hiring and contracting decisions. There also needs to be more active work with citizens - they are the main users of urban space, and they, ultimately, are the clients.

Mari Chichagova graduated with honours degree from the Faculty of Philology of Lomonosov Moscow State University in 2009. In 2010 she started working at "Interior + Design," a magazine dedicated to architecture, design, culture and about people who were defining and driving those processes, from Norman Foster to Le Corbusier and Zaha Hadid. Afterwards she worked as a PR specialist at the Strelka Institute of Media, Architecture and Design, a Russian institution that is working in the field of urban studies, using a multi-disciplinary approach.

Since 2013 she has worked as a Deputy PR Director and then as an Acting PR Director at Gorky Park, Moscow’s Central park. In addition to PR duties, she initiated contacts with other significant parks and organizations around the globe such as International Federation of Parks and Recreation Administration, the San Francisco Golden Gate Park, San Francisco Recreation and Park Department, Central Park of New York among others.

All images of Gorky Park (excluding image of Garage Museum) via Shutterstock.com