Developed by FilzFelt and Gensler’s LA office, “Link” modular felt panels can be used for a variety of applications, from room partitioning, to shading, to acoustical dampening, to adding textural interest to a wall surface. The panels were designed to tackle a particular design problem at Gensler’s LA office, where red glazed panels acting as an architectural statement to be viewed from the street had been casting a harsh light into the interior conference room space behind. Searching for a flexible, free-form solution, and a soft material to contrast with the hard glass, Gensler designers discovered wool felt. Enter “Link.” 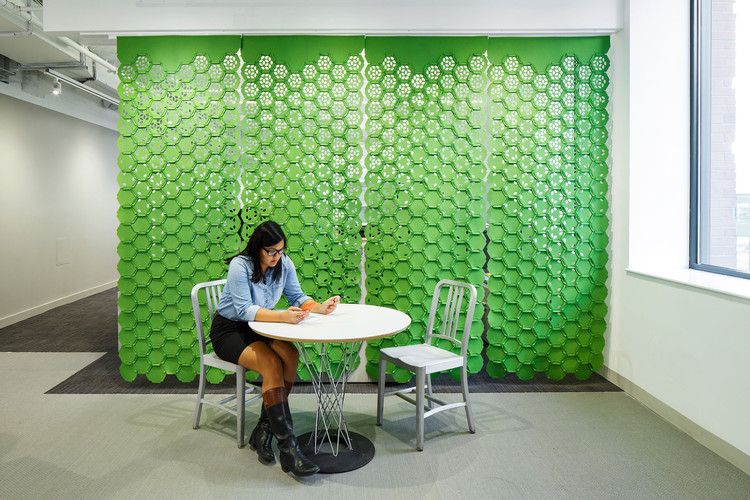 “While developing Link, the design team played with a range of materials, but in time we realized the warmth, durability, and acoustical properties offered by a wool felt product was the right decision," commented Daniel Stromborg, Gensler’s Firmwide Product Design Practice Area Leader, on the use of the material. "It became clear that FilzFelt was the perfect partnership for the design.”

Inspired by the negative spaces created from tree canopies, the 3 millimeter Wool Design Felt panels are CNC milled to create perforations of varying quantity, and tabbed so attaching one to another is as simple as sliding the felt into place. The hexagonal panels come in five transparency options ranging from 0 to 80 percent transparency and are available in 63 colors.

“The tab and slot connections create an unexpected three dimensionality and secondary patterning that is quite striking.” added FilzFelt’s Vice President of Design Kelly Smith. “The modular construction allows multiple colors to be used within a panel which is something we were not able to offer previously.”

Because they don’t require hardware to attach to one another, “Link” systems can grow or shrink quickly, and different arrangements can be set-up at moment’s notice for various applications.

To find out more about FilzFelt Link, visit the website here.