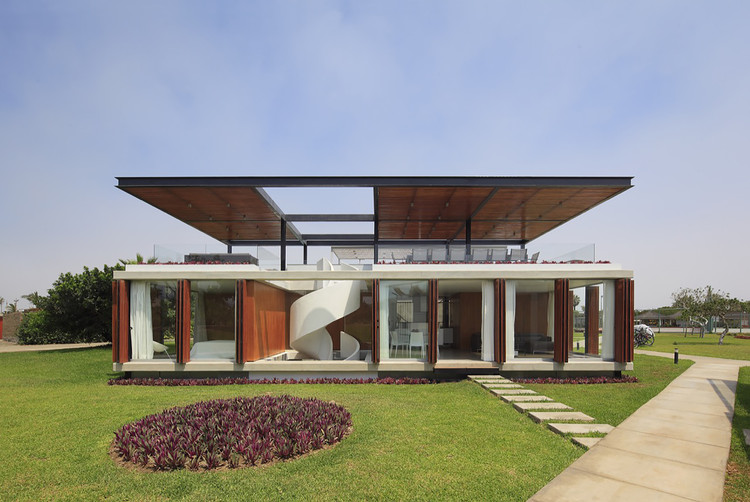 Text description provided by the architects. This second home project aimed particularly at leisure and socializing in one of the beach condos south of Lima, posed the challenge of intensive temporary habitation and the opportunity to reinterpret a historical prototype: Maison Domino by Le Corbusier.

The building standards for the small semi isolated lot of 15x8 meters in the middle of an artificial oasis, only allowed the construction of single storey house plus a roof terrace to ensure the enjoyment of the "essential joys": sun, space, vegetation and the view over the desert landscape between the Isle of Asia and the coastal foothills of the Andes.

The recreational use of the house by owners and guests during the summer weekends contrasts with minimal use during the rest of the year, so the program stratification should facilitate the opposed nature of the project: External during summer and private during winter. Thus, the proportion of public places are distributed hierarchically in the expanded mode from the roof terrace to the basement, with the first floor as intermediate level housing a minimum bedroom area for its proper operation in a compact mode.

The location of the lot, far from the beach and surrounded by a grove, gives some natural privacy to its occupants, which allowed us to project greater transparency in its enclosures, more consistent with the open character of its owners and the need to have a passive thermal management system that runs through sunlight and ventilation control of the concrete mass.

The rational expression that conveys the modulated order of the structure of iron columns and beams and lightened concrete slabs, as well as the secondary cladding elements, are balanced with the organic expression of the spiral staircase. This vertical circulation element takes center stage in contrast, as an object of poetic reaction of seaside resonance. A counterpoint between the orthogonal and the sinuous. 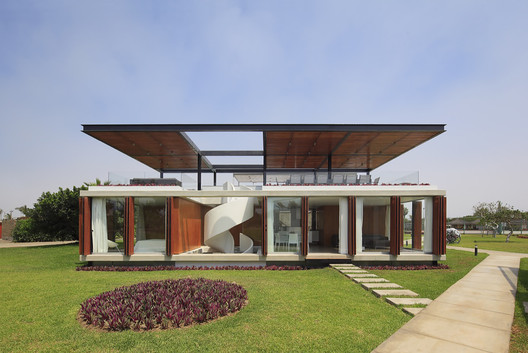