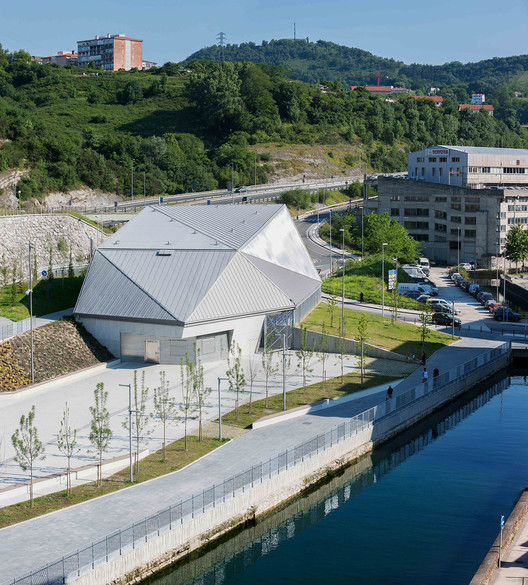 Text description provided by the architects. Pasajes Bay is a privileged natural location, determined by a mouth of 300 meters long; a natural corridor flanked by cliffs, which gives access to the seaport and protects the ships inside, setting an exceptional refuge seaport.

The historical evolution of this territory has verified over the years, that its great virtue was its great problem, indeed. The magnificent sea conditions of its harbor which brought it on exponentially, during the Industrial Revolution, transformed this exceptional natural territory into a productive landscape. On the one hand, emblem, of the industrial development of the region, on the other hand, emblem of the transforming power of Man. In this unique natural setting, heavy metal processing industries, great rail transport infrastructure, coal based thermal power plant and countless logistic industries were settled down, completely transforming both appearance and economy of the region.

The evolution of the productive system, from heavy to technological industry and the logics of a new Society, aware of the need to restore the Environment, released many plots, which now are transformed to serve residential areas.

The dismantling of abandoned industrial buildings and the decontamination of the soils occupied by these buildings, left as a result, a lunar terrain, with no references to the past, with no recognizable topography, with no significant reference points, apart from its clearly defined edges: railway infrastructure, ring road and Molinao river.

In this place, result of "tabula rasa", the first intervention was setting up a new topography. Taking advantage of the required excavation to build the Pelota Court, a small hill is given shape, which besides is complemented with a powerful wooded dough; this way it's built a spacer element for this new urban area, from the ring road. This element is further supported by the construction of a sports path that runs along the highest point of the site, connecting with both ends of existing paths, which besides serves as a support to a new platform with sports sets for elderly people.

The intermediate area of the place is configured by a public square, linked to Pelota Court, recalling the classic urban typology of Basque Pelota Courts, where Square and Pelota Court form an indivisible unit. The square is configured as an "empty" space, where it's possible to take place a variety of events, from concerts, popular lunches, to circus on regional tour. The Pelota Court also maintains its multipurpose spirit, and gives up its regulatory measures of the game of Pelota, for all kind of cultural and social events that can take place in the emptiness of its trihedron of 36 x 14 x 12 meters, open to bleachers for a capacity of 250 spectators.

The last layer of the intervention sets a riverside promenade accompanying the Molinao river. The need to match the levels of both edges of the riversides is solved by a prefabricated concrete wall, revealing at first glance the original level, on which the new urban landscape rises.

The built object of the Pelota Court is the most prominent element of the intervention. Its dimensions require a large volume, which through its partial burial, gets a suitable scale, respectful to the surroundings. This downscaling is emphasized by the treatment of the built piece as an object, turning the building into an almost sculptural element. A little "kiosk" cafe and an automatic toilet, serve as intermediate functional elements between the uses of the Pelota Court and the square.

The faceted shaped geometry of the building, always suggests a fragmented reading of the sculptural volume of the piece. This way its presence, always changing, is the result to several points of view. This same planes key reading is amplified due to the construction, since the different sides impose different orientations for each zinc sheet, providing a texture that singularly designs each plane. These same patterns of faceted shaped geometries organize the proper elements of urbanization, such as handrails and closings, as well as flowerbeds or seat banks, building through geometry and matter, a unity of different elements thatform a whole. 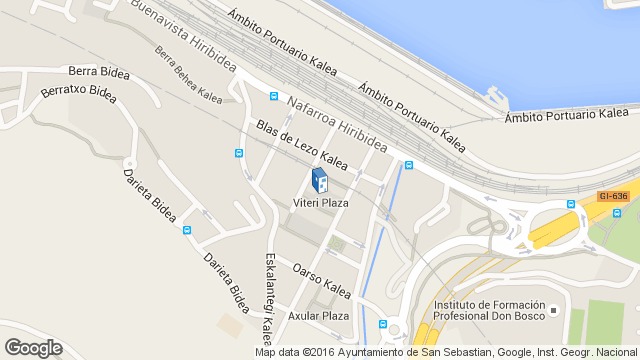