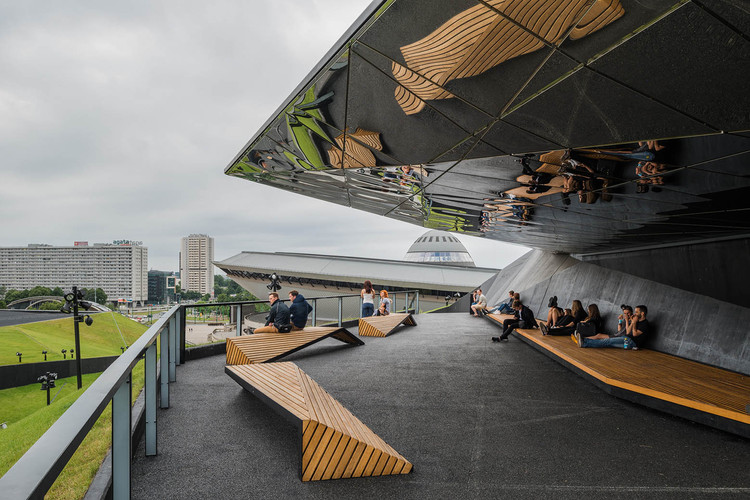 Text description provided by the architects. The Katowice International Conference Centre project situated nearby the Spodek arena erected in 1962 posed a challenge in both urban planning and architectural terms.

Spodek (meaning “Saucer” in Polish), a building ranked among the finest achievements of Poland’s contemporary architecture, and one of its foremost icons (created by the architects Maciej Gintowt and Maciej Krasiński), a symbol of Katowice and the Upper Silesian region, is an instance of unambiguous architecture with outstanding compositional features, whose value must not be diminished by any new development. But at the same time, both the scale and importance of the proposed new showcase for the city and the region, prompted a quest for an unambiguous, lucid and logical solution integrated into the fabric of this part of the city, dominated by the existing and planned large-scale structures (Spodek Arena, Silesian Museum, Philharmonic Concert Hall).

The general philosophy behind the design was to create a facility with a value created not only by providing functional solutions of a utilitarian nature, but also by creating conditions for its existence within the social space of the city. The Centre building, with its straightforward, distinct and clear-cut form, has been integrated into the public space of the city through links provided along the city’s key axis connecting the "honorary" square in front of Spodek (also the main traffic node of Katowice) and the city’s oldest, historic district of Bogucice. The links are implemented in a two-fold manner: in the form of a public passageway across the main hall and foyer of the Centre (a link to be used especially during open events, such as fairs or exhibitions) and in the form of an external route running over the building roof (green valley), which may be used throughout the year for events such as outdoor exhibitions or happenings.

This philosophy has led to the formation of the building, its core composition elements being the roof (green valley), integrated into a system of land slopes and natural diversity of terrain, and the hall/foyer space below, taking advantage of the ceiling deformation as a unique feature, a negative of the “green valley” form. The structure shaped this way meets both the expectations arising from its importance and prestige, and from the need to make it an inherent part of the landscape surrounding the Spodek Arena, which will remain a dominant landmark within the space of this part of the city. 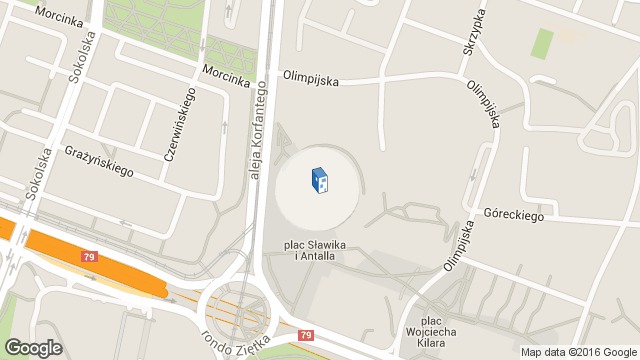 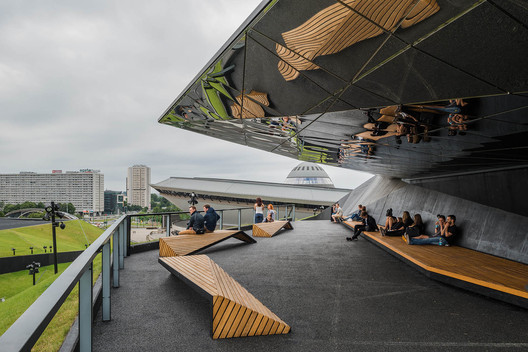