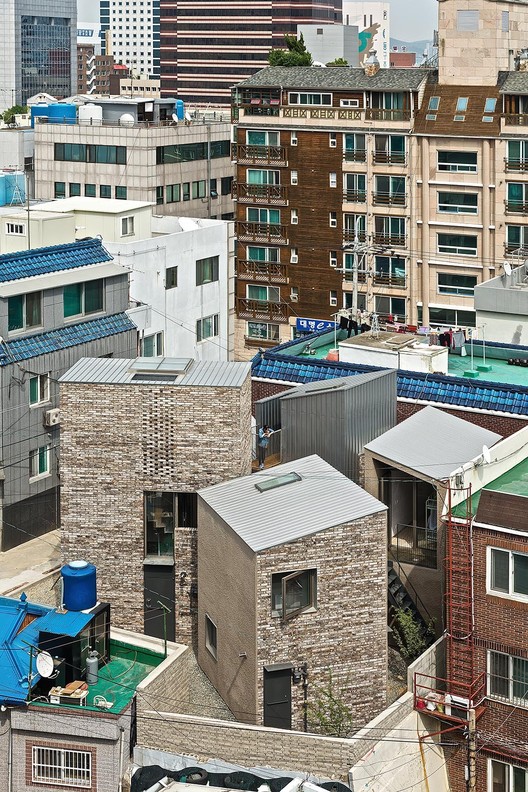 Text description provided by the architects. The trees disappeared without a trace. They probably had been settled like sardines along the topography of the mountain a long time ago. The place got filled with artificial trees of different height and size, placed in a proper distance from each other. Between the distance, a southern sea breeze would linger for a while or the midday warm light beating down from the northwestern high altitudes would collect in no time. Time to time, we face the reflection of ourselves casted on the shadow of the trees. And sometimes we chase after the shadow of the trees, rolling the hoops all day long (fig.1).

The landscape created by the five trees, which we encountered by chance in the middle of chasing after numerously linked alleys like wandering around in a maze, stopped our steps. Probably, it was because the landscapes of mutually different time were growing. On the site where a new guest house would be built, there used to be two old trees, one old Japanese housing (a Japanese-owned house which was returned to the Korean government after World War Two ), and two tumbledown slate-roofed houses. I was eager to prod one’s memory about these 5 sorts of different times and memories and to transplant another time into this place. At the place of Choryang where housings from different time are sharing the land, old Japanese housing, slate-roofed house, multi-family dwelling, and apartment house, etc. have filled up the slope face of a mountain area while maintaining an individually different scale and a rare density. Like camouflage phenomenon of the nature that assimilates the colors of the surrounding to protect oneself from natural enemies,

It is inevitable to begin with intrinsic properties and small scale to retain even the smallest relationship from the predator called grand scale linear development method by big capital. I believe that there should be a different attitude especially for the new constructions in old town like Choyrang, and I suggest reproduction of the familiar experiences that only can be found in the place, such as the intimate scales of the alleyways and stiff steps along the slope face of the hill.

The various gaps that resemble the active order of trees in a forest, not the physical boundaries that separate the surroundings, bring the alleys into the site and blur the border. I decided the materials and the form of the building to have the originality and familiarity that the place harbored for a long time. Most of the surrounding houses is finished with small exterior materials embodying the property of time such as bricks and tiles and each of facade of a building has different materials. I wanted to resemble those houses that allow us different faces on each of the sides or display the warm faces engraved on its old spray stucco facade by the hands of the unknown workers.

Also, I wanted to exclude formativeness of architecture and the building to pervade into the surrounding with its various size, height and density of the element. The five trees express the five houses metaphorically. One of them is a little house for one-person household where the building owner will live, and the remaining four trees are designed for houses for travelers. The street created by five little houses on the site of 137m2 through house-sharing gives an arbitrary feeling of distance between trees which always face each other in Nature. In between the trees, the landscapes of individually different time of Choryang permeate. Such landscapes of Choryang will provide stopover travelers with refreshing wind and warm light. 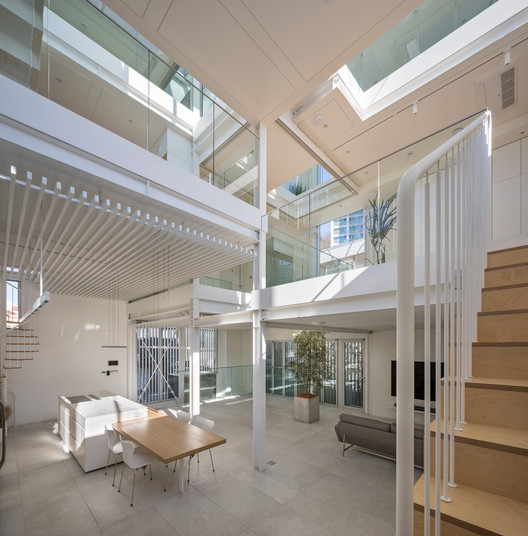