A design team led by Nikken Sekkei, in collaboration with Tierra Design and Arup Singapore, has won a competition to Master Plan a 24-kilometer long former railway corridor that spans the entirety of Singapore with their proposal entitled “Lines of Life.” The proposal, chosen by a panel from Singapore’s Urban Redevelopment Authority incorporates green areas, footpaths, bicycle paths, and surrounding developments that are flexibly implementable over many years, so that the former train line can be best integrated into its surroundings.

Lines of Life focuses on the area as public space in an effort to be “inspiring, accessible, comfortable, memorable, eco-friendly, growing, and evolving,” so that it can weave “the communities on both sides into the life of the rail corridor by providing a continuous high quality public space, adding to the high quality life in Singapore, as well as acting as a catalyst to development and community bonding.”

The winning team is now tasked with a preliminary design study of an initial four-kilometer Signature Stretch of the corridor. Learn more about the project here. 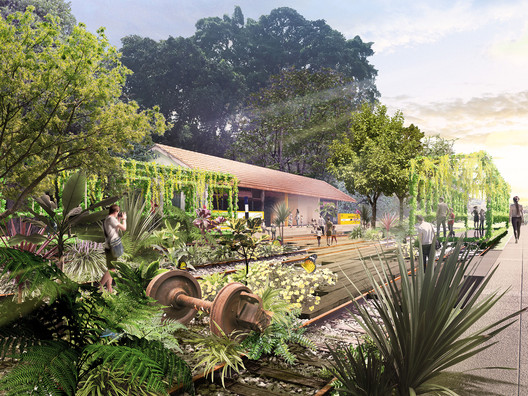