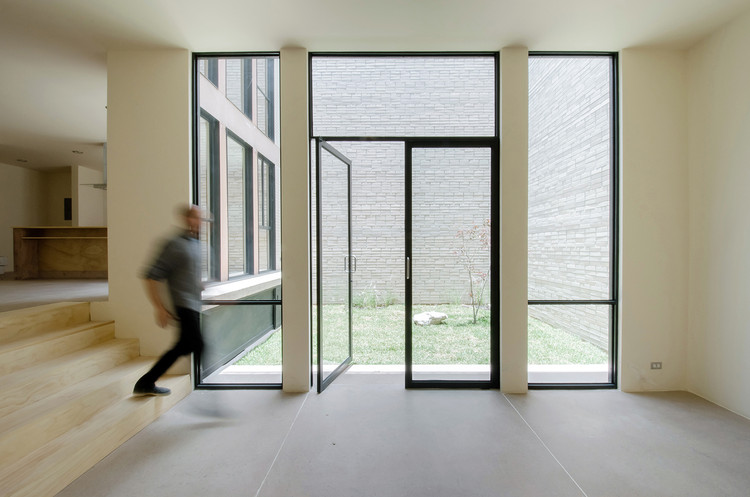 Text description provided by the architects. Two identical houses in Angelópolis, a suburban neighborhood in the city of Puebla. Built with a limited budget and their leasing in mind, the challenge in their creation was to offer a design that would be spatially attractive to two unknown groups of users. Their design entailed a reading of the socioeconomic profile of the potential tenants, as well as interpretation of their possible domestic expectations.

A high prism in its access contains half of the house’s vertical circulation, followed by a ground floor that has practically no dividing walls. By taking advantage of the preexisting levels in the site’s topography, the house grows in height as the user walks towards the public spaces of the house.

Both houses maintain the use of walls at a minimum, using steel and window niches that replace standard windows by framing different views from its interior from floor to ceiling. Each of the four walls in every room presents a view to the outside, marked by support columns that form rectangular niches. These niches produce different framing effects towards the exterior , conceived to match with the line of vision in which furniture such as desks and sofas might be employed.

The structure is mainly composed by brickwork in ‘kit-kat’ imbrication, supported by structural concrete elements that match the soft pink color of the clay brickwork and its interior walls, which are mostly plastered. The houses deliberately seek unity within themselves and the neighborhood.

With the intention of keeping the spatial requirements to and not constraining the usage of spaces, the design of both houses merely separates the public and private functions within a simple, middle-class living programme. Its design represents an exercise in restraint.