Text description provided by the architects. The allotment is in the center of a small seaside town with a fuzzy site between rural and urban landscape, where we can see a consolidated area mixed with expectant land or agricultural ﬁelds. The relationship of the building with the street is also peculiar, either by the diagonal set, but also by the excessive depth of ﬁeld. It is the lowest part that makes the connection with the public space.

With these assumptions, we tried to draw a very plastic object, which begins at the edge of the allotment extending itself as much as possible to the inside face.

To emphasize this solution as well as to solve the relationship with the street, respecting the orthogonality in the construction, we used a trick: a sloped front garden. This garden increases the extent of the proposal hindering the perception of the limits of the building. At the same time the shape of the garden minimizes the size of the construction revealing a discrete volume of only one simulated ﬂoor.

The entrance is on the north side leaving the living areas facing south which are protected by the design of the top ﬂoor. This balance creates a large balcony with iron railings, which also protects the most intimate areas (bedrooms), regulating and optimizing their exposure to sunlight.

On the inside face of the building, with only one ﬂoor, there is a garage for two cars and the service areas in a direct relation with the rest of the house program.

In this work we tried to balance the domestic spaces with some conceptual design, creating a relationship between the pearl coating,  the dark golden frames and  the iron with the outdoor spaces rather abstracts/ ascetics, underlined by the slabs in dark concrete, the artiﬁcial garden stone and the green cover grid.

See all Show less
Share
Or
Copy
About this office
M2.senos
Office
••• 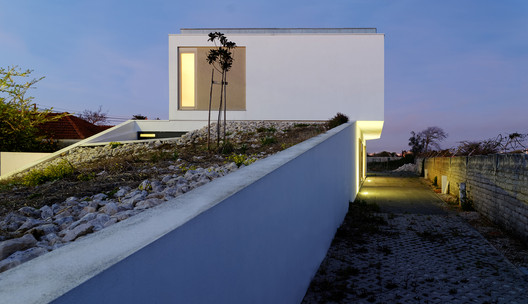