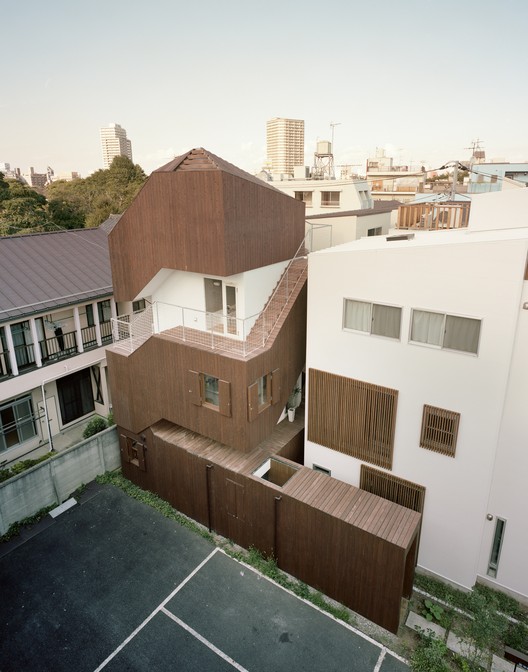 “Double Helix House” is a small house which is located in Yanaka, Tokyo.  There are many old wooden houses and historical temples which were left unscathed by war.   This creates attractive atmosphere among alleys and small galleries.  We proposed that this house should be built in this kind of atmosphere, with attractive buildings all around. The site is a flag-shaped place with two narrow streets in front of it.  It is surrounded by neighborhood houses and looks like a secret garden, but at the same time, it feels as if it is a part of the streets.

Inspired by the site, we got an idea of a composition of the house. There are 2 simple elements, a white core and an alley-like corridor winding up around it. In the white core, there are spaces for a dining room, a kitchen, bedrooms, a living room and a bathroom. In the corridor, we made spaces for the family, a small library, and a study with desks and chairs.  On the roof of the corridor is a terrace and two helixes from the inside and outside are intertwining.

The composition of this house is quite simple, however once you step inside, you can feel its lightness, darkness, narrowness, width and even the speed of your step.  We believe that we could design a house which cannot be explained by the common sense of length or width.  This is a house with a new sense of depth.