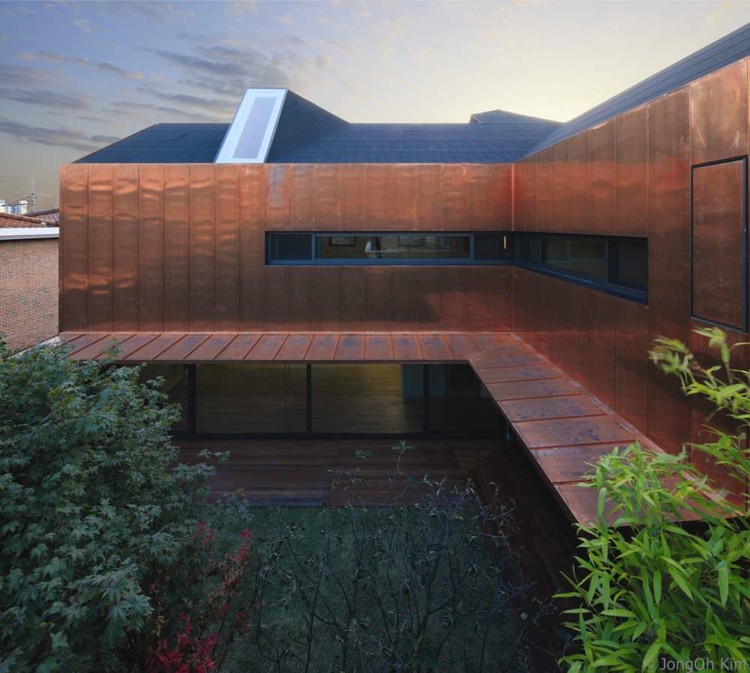 Text description provided by the architects. YeonHui-Dong is a village where has been a living area for conservative upper-middle class from the late sixties. It settled on a slow slope from northwestern long and low hillside. The front garden of each houses are leveled up one floor higher than the front street. A block is composed with six or eight lots each of them are about 330m2.

In Korea, people dream about having a large garden at the front of the house. YeonHui-Dong’s overall village layout is the clearest evidence of this desire. In consequence, most of the houses have neighboring houses on three sides with 2 meters wide outdoor corridors with a low wall in the middle. This typical arrangement has determined the homogeneous shape of the village.

My client had four children of 1,3,5,7 years old when came to me to ask the commission and now the children became 3,5,7,9 years old. He is a successful business man over 40. He wanted to give a room to each child and his own private room safe from children to stay quite sometimes because after the completion of house he was supposed to spend more time to work from home.

On my first visit to the site, I strongly felt the decades old stubborn positioning problem. So I decided to give a cross shape plan having four different yards of different roles each. Then unexpected distant views appeared and nearing old gardens were opened. Narrow and useless outdoor corridor in between buildings disappeared.

Positioning the kitchen between two lager yards permitted easy supervising of children playing in both yards expanding visual spaciousness of kitchen. On the long and thin yard I put the stair to approach to the entrance. To the last cozy yard I shared a hidden room for the client.

Opened to four diagonal ends, the layout brought me a new problem. How to deal with the periphery.

On three sides facing neighboring houses, there were low walls of slightly different heights around 1.2m. 1.8m’s height was good to cover the walls and to keep the privacy. As material I chose metal wire mesh of 4 cm grid. Easily rusting nature of metal wire-mesh and its transparency seemed good if Mr. Kim would agree to the rust metal for his fence . He agreed. People were stupefied of how Mr. Kim accepted with such an easiness. On the building sides of facing fences, instead, I used 4cm wide thin metal plate with 4cm distance. This row of metal plates must show and hide the concrete structure of house. The height must match to that of fence.

For the underground level facing the street, I showed the concrete structure of the building.

Having neighbors so close, to guarantee a privacy of bedrooms the volume of the second floor must have been closed. Pitched roof gives spaciousness to the closed volume reminding other roofs of village and of distant hill. Two top lights are soaring up to the sky keeping inclinations of the roof. They are not so visible from outside but are dramatic from inside. Seen from above, they adds a subtle skyline to the village.

I wanted use material which has paradoxical quality of differentiating and harmonizing for the second floor. The copper material which is different from other two metal materials used in ground floor, it’s clear cut finishing with light reflecting surface will fade very slowly in time matching to the red bricks of adjacent houses.

Lastly the roof is enveloped with black asphalt sheet. This is to high light the hidden concrete structure visible on the street level but hides the structure on the first floor. I used three different kinds of metals in this house hoping that each one with precise role. Three different time of ripe , thus three different way of answering to the context being honest to its nature. Written by Jean Son 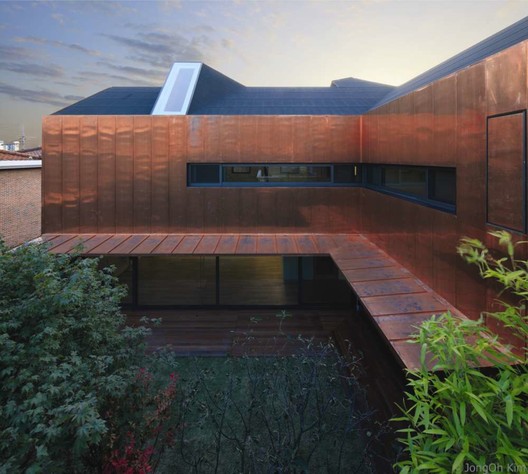