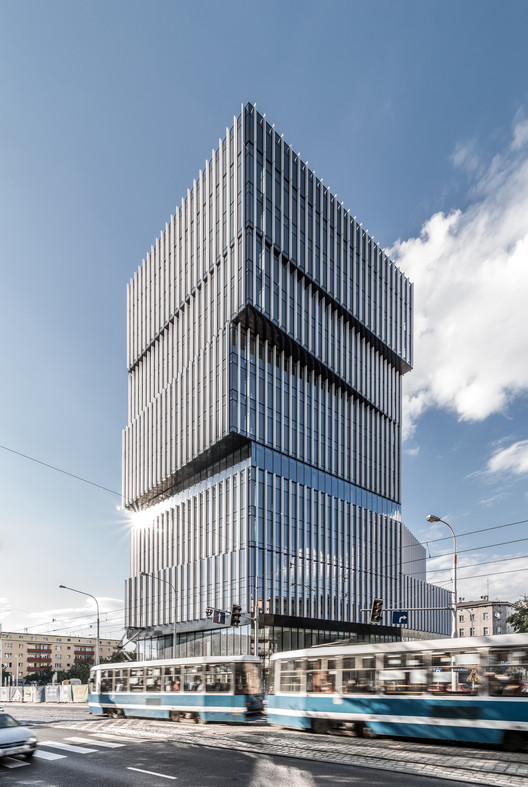 Text description provided by the architects. Silver Tower Center building is located on the Pilsudski’s Street, on an unusual plot resulting from the parcellation of the former Jewish cemetery. Typical urban quarter was divided diagonally to commemorate trace of the former greenery, which was a cemetery facilities in the past.

According to planning decisions, the building consists of a 6-storey base, designated the average height of the surrounding buildings and a dominant, for which the plans do not provide any restrictions. During the tests on spatial models, it was decided with a height of approx. 55 m, as a value sufficient for the spatial accent. Produced dominant stresses the opening of the Pilsudski street on foreground of railway station and signals its presence. The shape of the tower is divided into modules slightly rotated arround the vertical axis in order to obtain a dynamic enhancering impression of slenderness. The treatment improved insolation of neighboring buildings as well. On the resulting integrated "cubes" facade divisions were introduced, allowing the development of open office space into modules. Vertical, 30 cm deep profiles, allowed to strengthen vertical silhouette, improving the proportions of the building. Thanks to them it was achieved the desired play of light on the facade, giving it a strong artistic expression. "Razor blades" are also part of the facade shading solution providing comfort without resorting to complex and costly systems while leaving the breathtaking views.

Building Silver Tower Center contains a set of commercial services: 3-star hotel, conference center, offices, commerce and underground, 2-storey car park. Shops and services were provided entry from adjacent streets, taking care of their vitality, and on the resulting square was organized space for outdoor gardens. The building brings a revival of this part of Przedmieście Oławskie, with a bad reputation so far, and represents another step towards the revitalization of this area. 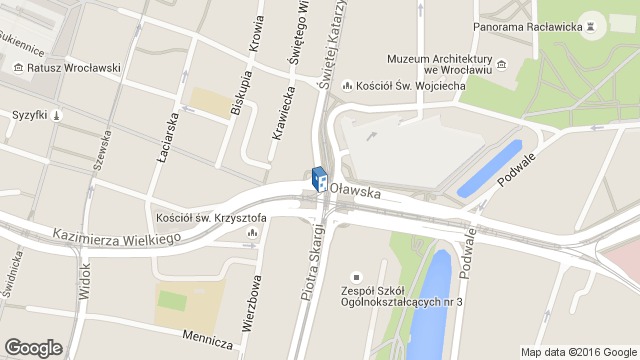