Text description provided by the architects. When one considers the City of Naples, it is easy to bring to mind clichés and caricatures. There is the mafia, the rowdy populace, the pizza, the local sports heroes. Even today, the city feels as if it is reliving its own pastime. It resonates with history, the worn but charming buildings set against an undulating topography concealing layers of legends, triumphs, and tragedies that have rattled the cityscape since ancient times. The task of building new often results in conflict with such heritage and its defenders, and many ambitious efforts to revitalize (that is, modernize) the urban fabric have fallen by the wayside, our agency being no stranger to this occurrence.

Yet how fortunate to have overseen the overhaul of one of Naples’ more interesting Turn of the Century edifices, the Montesanto Regional Railway Station. Dating from 1889, the station opens onto a piazzetta of the same name. As an important fixture in the rail infrastructure of the region, the building serves the Cumana and

Circumflegrea lines, the former being celebrated for its impressive seaside vistas. In addition to accommodating these networks, the station is also the low end of a funicular that scales the Naples hillside leading to Sant’Elmo castle.

Over the years, the station accumulated a number of unfortunate add-ons intended to provide improvised solutions to cope with increasing passenger traffic. Station operators first enlarged the main covered waiting area located on the upper level, and later expanded and enclosed the funicular platform inside a series of strange box-like structures. These additions had a tacked-on appearance that rarely discouraged vandals from leaving their mark. By 1990, the station had fallen into a significant state of disrepair.

A restoration campaign, launched by Ferrosud 2 in 2004, sought to overhaul the building. In addition to refurbishing its historical façades, the project involved removing the haphazard additions amassed over time, in view of replacing them with new structures designed to accommodate the building’s growing passenger numbers.

The project undertaken by the agency restored the building’s façades and turrets to their original state, with particular attention given to the grand entry portico and the notable metalwork located on the upper loggia level. Today this loggia again serves as the station’s main waiting area, and its redesign revamped the floor plan to maximize visual transparency – passengers are simultaneously afforded views to the heart of the station (towards the train platforms) and the bustling public plaza in front of the entry portico.

Moving through the entry gates, passengers encounter a spacious street-level passenger hall, which flanks the ticket counters and automated tellers. A small newsstand is located opposite these services. From here, one accesses the upper level platforms and waiting zones via one of two staircases and escalator banks. Located beside the newsstand and ticketing areas, the new circulatory elements ease congestion to the upper level.

On the upper level, passengers await departing trains underneath a metal lattice structure with glazed panels for daylighting. Although covered, the seating area’s open-air character allows one to experience the site’s unique sensorial attributes... the noises and smells emanating from local market stands; the neon lights pulsating from the nearby storefronts; the vibrations of trains, cars, and pedestrian flows.

The platform zone contains four tracks and five platforms that are under constant surveillance in order to prevent overcrowding. Because of the station’s bermed condition, enlarging this zone was impossible. Still, the project redistributes passenger circulation to provide a larger arrivals hall area, formerly a major bottleneck within the building. The platform shed receives ample daylight via glass skylights integrated within a metal trellis system measuring 1,000 m² in surface area.

Visiting the station during rush hour, one witnesses the orchestration of the loading and unloading sequence of trains. Station guards and sometimes police officers prevent passengers from climbing the central staircase just before the arrival of a train, the reason being because once a train enters the platform shed, passengers frenetically spill out of the graffiti-laced cars and rumble down the central stairs and escalators in all directions. The same guards herd those departing into roped-off queues on either side of the platform shed so as to not impede arriving passengers. Once unloading is complete, the guards remove the ropes and departing passengers run to find one of the cherished seats. The train departs and the cycle begins anew.

The agency focused on updating the main part of the station – the waiting areas and platform shed – by employing a system of subtraction. By removing unnecessary elements within the building’s core, a greater sense of visual transparency results. Reinforcing this approach is the use of a restrained material palette: reflective aluminum panels, steel columns and latticework, glazed panels, durable inlayed stone flooring tiles, and the original brickwork of the tunnel entrances. The agency was also responsible for the design of integrated lighting, furniture, and way-finding fixtures, which employ the same materials.

A unique feature of the platform shed is its incorporation of works by photographer Mimmo Jodice, the images depicting scenes of various archaeological ruins dotting the routes of the regional lines departing the station. While these particular photographs are permanent, the intention to include artistic installations within the building interior is carried over to a privatized second level (ground level+2), which contains multipurpose spaces and station offices.

The multipurpose gallery affords visitors with views of incoming and departing trains, and gives on a roof deck overlooking the Montesanto plaza. A sober palette of wooden parquet flooring and inlayed metal acoustical ceiling panels with integrated lighting completes the space.

Both the main waiting areas and platform shed have direct access to the new funicular platform volume. Passengers may also reach this area of the station via a separate staircase leading from a side entrance (off the main entry portico) at street-level.

The industrial aesthetic of the volume uses a striking glass brise-soleil system anchored to a lightweight steel structure, its design dialoguing with the historical architectural features of the station while not overpowering them. Inside the funicular hall, the rhythm of the glazed panels accentuates the sensation of a linear and sloping structure, one that seems to be pulled upwards by the hillside.

Such a metaphor is appropriate, as the Montesanto Station is a building pulled in many directions. It is an urban landmark caught up in the story of Naples. It is a witness to the sporadic (usually innocent) brawls popping-up in front of, around, and inside its borders. Its landlocked site contends with problems of maintenance, as the over-saturation of passenger traffic along the regional lines shows no signs of abating. And like most of the revitalization efforts for the region, a few of the project features have yet to come to fruition, such as the inclusion of a rooftop restaurant and bar and a more generous street-level bookstore.

The lasting imprint, though, is that of a building wholly appropriated by its citizens. Thanks to a sensibly executed and well-timed renovation and redesign, the station seems to have what it takes to endure well into the future. 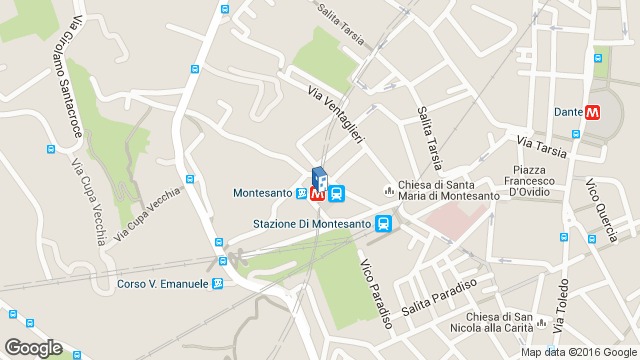 Location to be used only as a reference. It could indicate city/country but not exact address.
Share
Or
Copy
About this office
Silvio d’Ascia Architecture
Office
•••