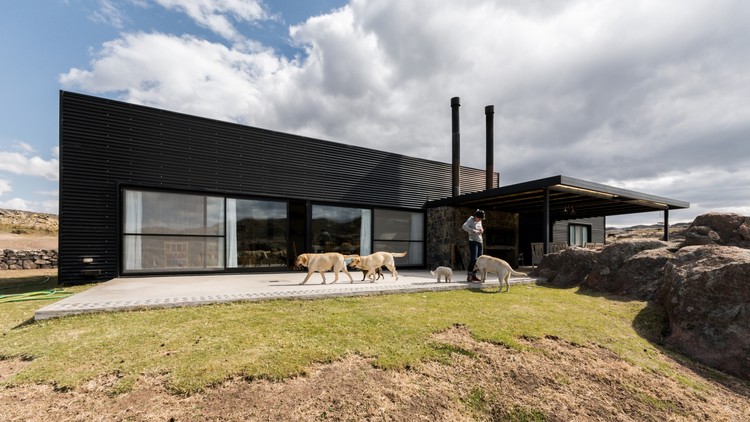 Text description provided by the architects. La Pampa de Pocho is an impressive place which makes the viewer fell in love with its silent and monochromatic landscape. The house lies at the center of this magical place, surrounded by three big stones which, at the same time, protect the house from the intense local winds.

The main idea is that visitors can see a black point in the horizon and can differentiate the house’s strong geometric shape from the local rock massifs. The black color of the sheet metal accompanies the stony color typical of the zone.

Due to its inhospitable characteristics (cold, dry and windy weather conditions), its isolated position from any population, its extremely difficult access, and the lack of specialized local labor force, the decision about the structural system to be implemented was the primal concern of this project. An industrial construction system was chosen in order to allow an easier transport of the materials used as well as a possible construction under unfavorable physical conditions (neither water nor electricity)

In the south-facing façade, there are few windows and an entrance; and in the north-facing façade, there are large windows and door openings which capture the greatness of the landscape and enhance the entry of warm natural light. Indoors, there are two patios which accompany the tour: the big one links the house to the barbecue area; the narrow one, the one with native cactus plants, lights up the corridor as well the bedrooms.

The stone used was collected from the zone (it was the only material that required the use of water.) Water is supplied through a pumping system of water coming from a nearby spring and electricity through a system of solar energy.

The achieved aim of this project was to inhabit this magical place and celebrate in each space our Nature’s impressive sights. 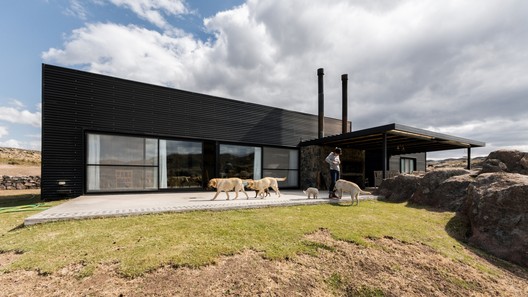