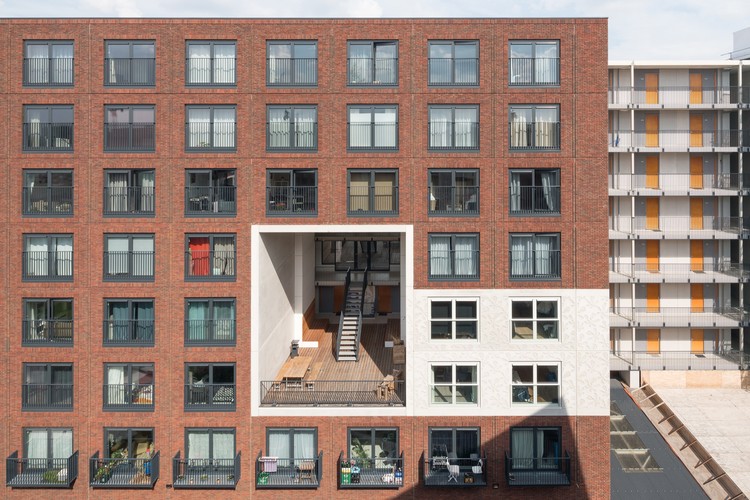 Text description provided by the architects. The municipality of Amsterdam is redeveloping an urban part of Amsterdam, named the Amstelkwartier. This area, formerly occupied by a water treatment plant, will be transformed into a large urban development area with several functions. One of those functions was destined to be housing, Kampman Architecten took the opportunity to create an interesting urban living complex for students within the dense structure of Amsterdam.

The urban configuration is shaped by a large horizontal wall of eight stories high. This wall expresses a strong language as a mass, but as you approach the wall you will be amazed by the detail of the bricks within the facade. Because of the horizontal wall and its position within the urban area, a large enclosed inner garden is created. To add diversity to the urban configuration a hotel will be constructed on the Southside of Villa Mokum in the future.

The corridor system is a key element in the design as it gives access to the apartments and loggias. Voids have been created to stimulate interaction between levels as well as the public space and the inner garden. The voids and loggias create an open atmosphere that stimulates airflow, opens up to light and create a certain social cohesion. Inhabitants of two stories share outside space and bike storage. This system strengthens the social atmosphere within the whole.

The facade is built up out of prefabricated concrete elements with brick and concrete surfaces. Extruded bricks and a tulip motive on the concrete give a dynamic character to the horizontal wallparts on one of the facades. The motif has been specially designed for Villa Mokum and represents the Dutch tulip and the Amsterdam logo. This motif can also be seen in the fences, graphic design and corridors.

Even though the building is exposed to high sound impact on the side of the Spaklerweg, there are still apartments located on this side.  This is made possible by a innovative solution with ventilated corridors. The usual downsides of a corridor have been kept to a minimum by adding voids, loggias and reducing the length of the corridors.

The central entrance, and walking route, crosses an inner garden. This inner garden functions as a place where students can meet. Not only the students can use the inner garden, but also the inhabitants of the surrounding buildings. Thus the inner garden becomes an area where interaction is stimulated. Safety within the plan has been an important part of the design process. Social security can be maintained through openness and transparency, visual interaction, apartments with an entrance on the street side, inner garden that closes at night and a possibility to divide the large complex in smaller sections. 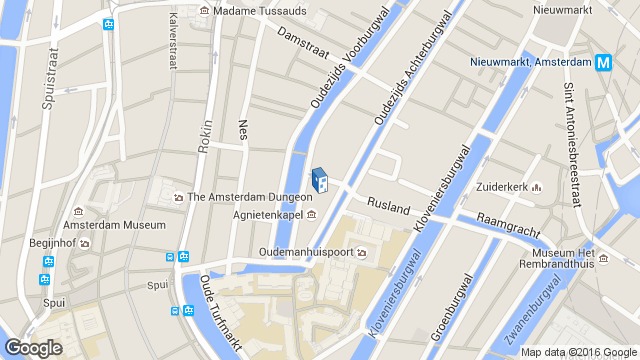 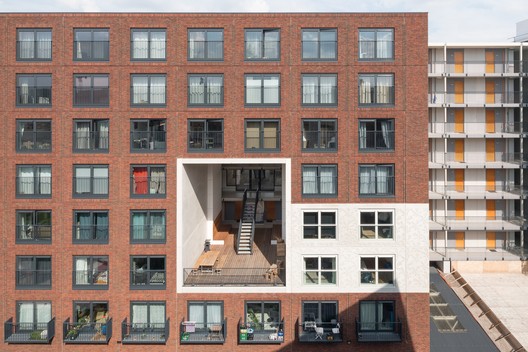