Following the release of their “Vertical House”, a prefabricated home designed for the tight, urban spaces of Japan, Japanese design brand Muji has showcased another set of ready-made habitats, this time a series of three minimalist “huts” at varying scales. Each hut, designed by a different designer, is intended as a retreat from urban activity and can be set-up in rural terrains.

The huts each explore a different material: an aluminum hut by Konstantin Grcic, a cork hut by Jasper Morrison, and a wooden hut by Naoto Fukasawa.

Konstantin Grcic’s hut is a narrow, two-storey cabin clad in corrugated aluminum, with wood and paper sliding panels at the top and bottom. The building contains no furniture, bathroom or kitchen, though a mezzanine is reachable via ladder. The front of the house features a panel that can be propped up for shade or left flat.

"My Muji hut represents an enclosed space which is small enough to stay within the norm of constructions which need no building permission in Japan," Grcic said. "Being a rigid and self-supportive structure it can be placed in any terrain and environment."

Jasper Morrison’s hut is a small house, removing the complications of construction. Despite its simplicity, the cork-paneled hut features a fireplace, stove, kitchen and bathroom.

"Whenever I think about going to the country for the weekend, I start imagining a small house with everything needed for a short stay: a place to cook, a place to eat, a place to wash, and a place to sleep," said Morrison. "The dream usually collapses when I think of the complexity of building a new house, but with this project I realized there was a chance to design such a house as a product rather than a one-off.”

"There is a certain charm when you hear the word 'hut'," Fukasawa said. "Not quite a holiday house, yet not as simple as going camping. If there is a small hut, there is a feeling that one could slip into nature anytime. I thought that living small in the smallest of structures is a Muji kind of living."

The huts will go on sale in Japan next year, and were on display at Tokyo Design Week from October 24-28, 2015. 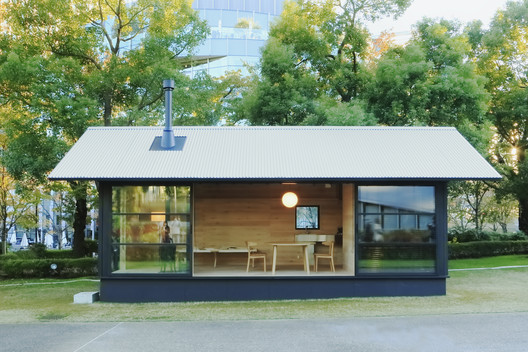