The "fragmented" lobby of Australia's Hotel Hotel in Canberra by March Studio has been named World Interior of the Year 2015. Announced at the INSIDE World Festival of Interiors in Singapore, concurrently with the World Architecture Festival's Building of the Year award, the winning project was selected over 100 nominated and 50 shortlisted projects for being the best global interior completed within the last 12 months. It also took top prize in the award's hotel category.

The project has created a "Bilbao effect" that has helped rejuvenate the area, said the judges. Adding, it's a "masterful integration of different spaces into a seamless and delightful interior."

Located in NewActon, a diverse new precinct in Canberra, Hotel Hotel is part of a wider scheme that encompasses offices, residential apartments, cafes and a cinema. Designed by March Studio, the signature design of the new hotel is a fragmented lobby entrance, which provides a unique identity for the building. A series of fractured timber pieces line the walls and furniture to create a tunneling effect that leads guests from the reception through to the main areas of the hotel.

At the centre of the hotel lies a grand staircase that services the two floors of accommodation and creates a focal point at the end of the fragmented entrance. A bar is also located on the ground floor and features openings punched through the concrete walls to create views to the central courtyard.

The repurposing of the timber in the lobby grabbed the judges’ attention for what they described as a “poetic use of leftover materials [to create a] powerful but not overwhelming” result.

The other category award winners were...

Civic, Culture and Transport: Exploded (Wuhan, China) / One Plus Partnership

News and project description courtesy of INSIDE. 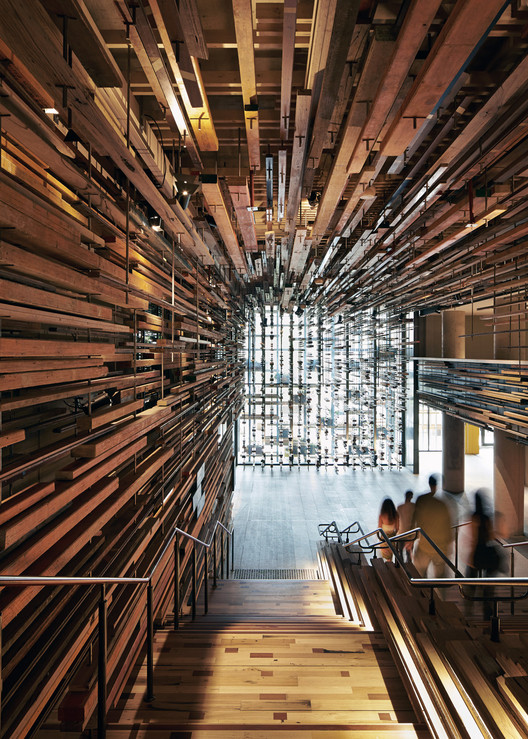