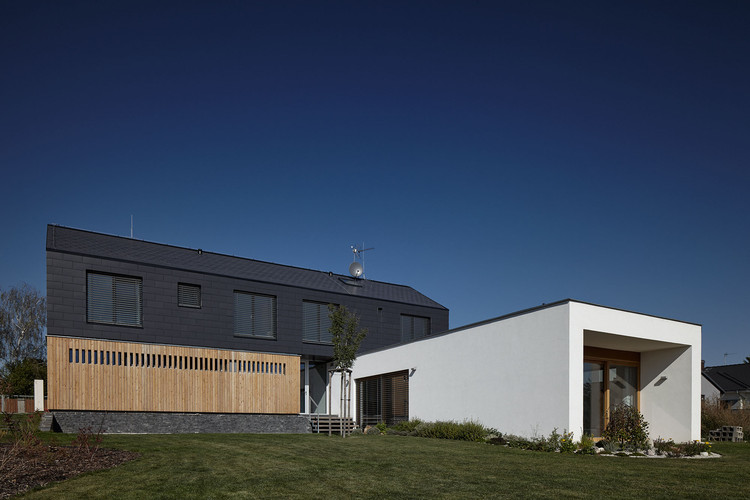 Text description provided by the architects. The house in Nučice may suggest a game with three “dice“, or boxes that differs from one another in their shapes and building materials.

The white box is solid, open towards the garden and set in the hillside. The second box, made of wood, is lighter than the white one and separates the garden from the street. The third box shaped as a low house with a ridge roof is set on the two other ones and faces the sun. The house entry finds its natural location in the interspace delimited by the three boxes.

The teamwork of various principles and materials peculiar to the individual boxes is reflected in the building interior, too.

In the white box house inhabitants will meet together in its living room, at the dining table and in the kitchen. The two elevation levels of the interior space that extend into the garden follow the topographic profile of the site. In the area where the floor level is lower, the vertical dimension of interior increases and its space is finally opened by its southern fully glazed wall. Exterior features of that house part are defined by its white external rendering and wooden windows of large size. The interior design employs wooden and white surfaces and hidden lighting.

The wooden technical and service part is closed in itself and, from outside, it looks as a wooden box, whose austere appearance is disturbed by the garage door only. Materials and items used in the interior correspond to its function. The grey floor is made of epoxy resin, doors are made of metal and light fixtures have got a more industrial appearance.

The upstairs is a compact unit, cased with roof pitch boards. In the interior, the house shape is implied by its opening into the roof space. The rooms provided with square windows face southwards, their square format being used universally for all window openings. Contrary to the white part of house with predominantly wooden interior surfaces colours are used in the upstairs, including its yellow floors, grey window frames & jambs and door cases. Light fixtures are both wall/ceiling-mounted and pendant.

The assembly of individual boxes resulted in the house rich in atmospheres, spaces and apertures, the house in which people have their breakfast in east sunbeams and have dinner in the golden light of sunset, house, where you can have your afternoon cup of coffee on the terrace even while raining and whose rooms are sunlit all the day long.