The recently announced competition to redesign Pershing Square, Los Angeles’ oldest park, will be at least the sixth iteration of the space in the heart of the city’s rapidly changing downtown. Occupying a full city block, what is now Pershing Square (named for the World War I general) was part of the 1781 Spanish land grant to the City of Los Angeles, and was officially dedicated as a park, originally called La Plaza Abaja, in 1866.[1] The current iteration, designed by Mexican architect Ricardo Legorreta and landscape architect Laurie Olin, with art installations by Barbara McCarren, opened in 1994. Just over twenty years later, the brightly-colored, geometric stucco structures, and the hardscape-heavy layout have faced extensive criticism–one local website is fond of calling it the city’s “most hated park”–but Legorreta and Olin’s design makes a bold statement for urban public space in Los Angeles, unmatched by any other park in the city. 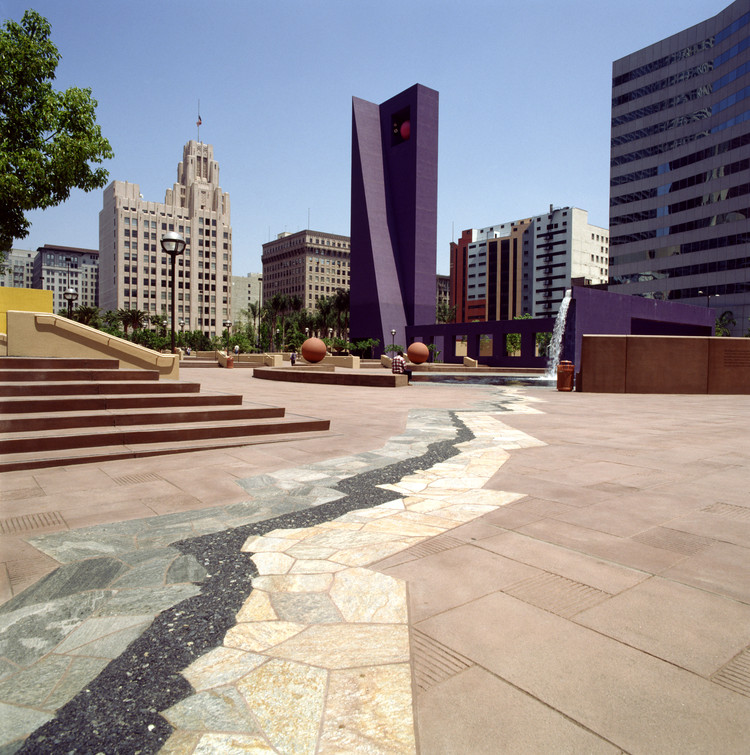 The block that became Pershing Square had been designated as municipal space in the original Spanish plan, but its use was largely informal, often serving as a campground for early settlers, until German immigrant George Lehman started planting and maintaining trees there, possibly before it was officially designated as a city park.[2] Like many urban parks, its history parallels urban development trends. The park’s lush tropical plantings and Beaux Arts design of the late-nineteenth and early-twentieth centuries complemented the glamorous addresses and institutions that bordered the park, including the Biltmore Hotel and the Los Angeles Philharmonic. But the park was indelibly transformed in the early 1950s when an underground parking garage was built on the site, replacing the dense plantings with an expansive lawn and small trees in sparse raised planters. Some historians have suggested that the minimal plantings in the 1950s redesign was an intentional strategy to discourage the gay cruising that had been commonplace in the park since as early as the 1920s.[3] The long, wide ramps to the parking garage lined all four sides of the perimeter, creating a discouraging barrier for pedestrians. As businesses moved away from the city’s historic core and into new office towers farther west, Pershing Square became a refuge for the city’s homeless population, and a hub of drug trafficking.

In the 1980s and early 1990s Robert Maguire, of Maguire Thomas Partners, led a group of neighboring property owners to push for a redesign of the park in an effort to make it more a attractive space for their tenants.[4] To help encourage the city to move forward, the group agreed to pay half of the cost the Legorreta and Olin redesign. The choice of Mexican architect Ricardo Legorreta, whether intentional or not, serves as a reminder of Los Angeles’ often overlooked history as Spanish and Mexican territory, before California became part of the United States--not to mention the city’s significant Mexican-American population. Legorreta’s work balances inspiration from Mexican vernacular architecture and the influence of Mexican modernists, especially Luis Barragán’s integration of architecture and landscape.[5] Laurie Olin, then of the Philadelphia-based firm Hanna/Olin Ltd., was already well known for major urban interventions such as Denver’s 16th Street Mall and the renovation of Bryant Park in New York.

The design of the park is anchored by two stucco structures at the midpoints of the two long sides of the rectangular city block. On the eastern edge, a 10-story tall purple campanile serves as a focal point and balances the scale of the tall buildings surrounding the park. At the top of the tower, a square cutout houses a pink sphere, an abstraction of the traditional bell. At the western edge, a single-story bright yellow pavilion houses space for a café and an office space for the police department. These two structures, and midblock pathway between them, divide the park into two primary zones. On the north end of the park, terraced lawns create an amphitheater, intended to host events and performances, while the southern side of the park is dominated by a water feature fed by an aqueduct extending from the base of the campanile, recalling the massive infrastructure that pipes water into Southern California.

Indeed, many features of the park allude to the specific history and character of Los Angeles, including a grove of citrus trees that reference the regions agricultural legacy, and a hardscape installation designed by artist Barbara McCarren that evokes an earthquake fault. The feature proved especially current when Pershing Square reopened just days after the 1994 Northridge earthquake.[6] Laurie Olin was even able to locate several of the King palms that were removed from the park when the parking garage was built–housed in a conservatory, and still alive four decades later­–and restored them to their original home.[7] A long line of tall pink stucco cylinders along the northeastern edge of the park defines the outer boundary of a sculpture garden, housing the monuments that punctuate Pershing Square’s history: a statue of a soldier from the Spanish-American war, a “doughboy” from World War I, a statue of Beethoven in honor of founder of the Los Angeles Philharmonic, and a cannon from the historic warship USS Constitution (nicknamed “Old Ironsides” during the War of 1812).[8]

Although the character of the park was totally transformed from its previous state, the designers still had to contend with the underground parking garage. The entry and exit ramps were shortened and narrowed, but access to the park is still limited to the four corners and two tenuous crosswalks that bisect the parking ramps on the east and west sides. Today, this limited access is one of most universally criticized aspects of the park, but the property owners who drove the renovation process likely saw it as a beneficial security feature. As one Los Angeles Times article described, shortly after the park reopened, “the property owners' association hopes that only law-abiding citizens will frequent the place, and that the local gangs and the homeless transients who have claimed the square in the recent past will stay away.”[9] But, the reporter continues, that focus on security, “has given the new Pershing Square a somewhat desolate look.”[10] As a result, the property owners’ efforts to sanitize and secure the park ended up driving away the very people they had hoped to attract.

Homelessness is still a constant feature of Pershing Square. Criticisms of the design are often voiced in the same breath as complaints over the smell of urine, begging the question of whether those critics are truly expressing displeasure with the architecture, or just the park’s clientele. A commentary in the LA Times at the time of the parks opening noted the park’s potential to bring disparate parts of the Los Angeles community together, but also noted that for the park to succeed in bringing in the white-collar workers, “they will have to be willing to rub shoulders with citizens they seem to prefer to keep at a distance.”[11] Just a few years later, a 2002 article celebrated the diverse mix of visitors in the park, from the Financial District office towers, the Latino shopping areas nearby, and as far away as Chinatown and Little Tokyo.[12] As new residents have moved into downtown Los Angeles, Pershing Square has become even more active. Today, food trucks often park in the plaza, providing added dining options; office workers from nearby buildings enjoy the park on their lunch hour; summer concerts and outdoor movie nights activate the space, along with an ice skating rink in the winter; and two new playgrounds have been added to cater to the families moving into downtown.

As it was in its earlier forms, Pershing Square remains a center of civic life, hosting protests and other gatherings. And the trees and plantings have matured, belying the myth that the park is made entirely of concrete.

Pershing Square certainly faces challenges, foremost among them the issue of the underground parking garage. As landscape designer Wade Graham declared in a recent op-ed for the LA Times, “The city's Original Sin at Pershing Square was sacrificing public space on the altar of the automobile.” But as Frances Anderton discovered in the December 2, 2014 episode of her radio show “Design and Architecture,” any redesign of the park will have to maintain the parking garage because it is a valuable source of revenue for the city. Will a new design be able to successfully address the challenge of building a park on the roof of a parking garage?

Large-scale urban activation takes time, sometimes decades, and while the new crop of downtown residents have helped catch up with the 1990s' ambitions for Pershing Square, popular taste has left its Postmodern aesthetic behind. Perhaps more importantly, the developers and owners of neighboring properties feel the need for a fancy new attraction to compete with the shopping centers and museums popping up in other areas of downtown Los Angeles. The board of Pershing Square Renew, the group behind the latest push to reinvent the park, is dominated by developers motivated to increase their property values, not unlike the property owners that advocated for the current design. Legorreta and Olin’s bold design, enabled by a pioneering form of public-private partnership, will soon be replaced by the output of a new public-private partnership, eager to keep up with changing architectural and landscape fashions, and driven by a quixotic desire to sanitize the urban public realm. As Sara Hernandez, the city’s liaison to Pershing Square Renew, told Frances Anderton, “To a certain extent, the constant evolution of Pershing Square is really a part of its history, and part of its identity. This is a space that has continually evolved throughout its history, for better or for worse.”

[2] Rasmussen, Cecilia. “L.A. Then and Now; The (d)evolution of a downtown landmark; From lush park to concrete plaza, Pershing Square has been changing, along with the city around it, for 141 years.” Los Angeles Times. 19 August 2007: B2.

[12] Ferrell, David. “SURROUNDINGS / PERSHING SQUARE; In the Heart of Downtown, a Tranquil Oasis; The city’s oldest park, with a faux pond and waterfall, bold colors and cubist lines, draws an eclectic mix of people.” Los Angeles Times. 20 June, 2002. B2. 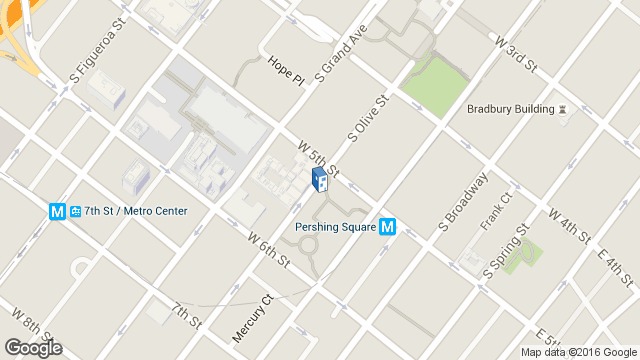