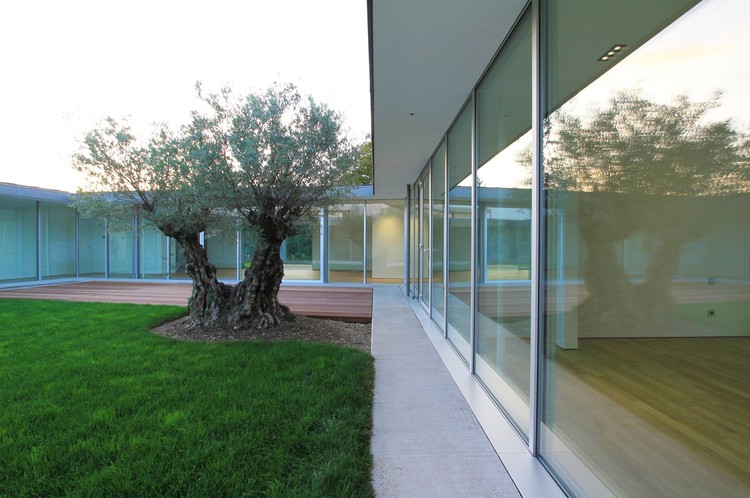 Text description provided by the architects. Designing a townhouse, practical, evolutionary and original, such is the challenge that the owners launched us. With the rather classical program of a XL size family house, we needed, not without difficulties, to integrate a large space dedicated to the car and made up of a “daily” garage and a “collection” garage for their old cars they also wanted to see from every spaces of their house. A last and essential point strongly influenced our approach, it is their will of a qualitative, respectful of environment and durable construction.

The site dedicated to the project is located in a residential district of the city of Colmar made up with individual dwellings at the contemporary character. The trapezoidal plot has a surface of 1120m ² with a light slope since the street towards the south. The heterogeneous environment does not give us any urban hangs except for an alignment on street imposed by the regulations. Once the observations makes on what was going to represent the context of our intervention, we decided to create our own environment and to use the absence of concrete data on future neighbouring constructions like a determining factor to be taken into account. This last point leads us to search a typology of habitat able to undergo deep transformations in its environment without losing its capacity to exist as an actor of the urbanity of the district.

A typology has particularly interested us compared to the interpretation of the program and the analysis of the components of the context. It was used differently in all the times and the cultures : the Romans called it patio or atrium, the catholics cloisters, Japanese Ryoanji. Nevertheless, the whole of these interpretations have some common denominators. Conscious of the importance of our acts and the consequences which they have on planet, thinking a project today means we have to minimize its impact and to optimize energies already present. Water and the sun are surely in the city of Colmar one of the resources to be taken into account. This geographical area profits from a sunny microclimate and dryness because “the effect of foehn” plays full there. It is the second least rainy city of France after Perpignan, with on average 95 to 100 days of rain and approximately 550 mm of precipitations a year. Our research and the data already accumulated up to that point, the typology of the patio house could be a good answer. The patio is a central space, more or less rectangular, and located at the center of the Roman house. It was composed by an impluvium intended to receive rainwater and by a compluvium (opening in roof).

The project takes place in the site as close as possible from the boundaries in order to release a maximum of space in the central courtyard. The building and the patio results from an offset of the shape of the plot. To simplify the constructive principle, the surfaces and the interior organization we choose to lightly twist the form to get right angles except the one who is aligned to the street. To conclude about the implantation of the construction and the researchs on the volumetry, we decide to slightly tilted the roof with the aim of improving the solar gain throughout the year. It allows also a management of rainwater inspired by the principle of the Roman house with compluvium.

In order to avoid inconsistencies between the concept – resulting from our researchs on typology and volumetry - and the organization of interior spaces, we are quickly looking into the distribution of the principal functions around the patio. Each “wing” having to contain a well defined use according to the orientations. The North wing, parallel to the street, is composed of the utilliy rooms, the entry, and the kitchen. In the West wing, we choose to organized the living room into a space who is voluntarily free of all partitions in order to not disturb the relation between the court and the garden, and profit from a maximum of solar gain and transparency.

The South wing is dedicated to the the rooms and bathrooms of the house. Each one having generous openings and access to the garden. The last one, the East part of the construction, contain the garages, one dedicated to the collection cars, accessible by the patio and entirely glazed, it makes it possible to the occupants to see them from the entire house, and the other, directed on the street has a function a daily use. The distribution system of interior spaces is ensured by a single corridor along the facades of the courtyard and acting as a participative space between inside and outside.

The owner wished very quickly to turn to a wood construction for its environmental qualities and fast manufacturing. The bet was taken to design this house in wood framework and entirely prefabricated in collaboration with a German structure engineer and carpenter. Some technical arguments related to the choice of wood prefabrication appeared true : the reduction of actors involved in the process, the rationalization of the construction costs, the quality of the manufacturing and the assembly, the improvement of the work conditions by reducing the inconveniences on the construction site.

The main technical challenge of this single storey wooden house, directly placed on a concrete pavement, was to create a patio completely glazed while keeping a continuity between the interior ceiling and the external under-face of the overflow ; considering this relation inside / outside is the heart of the project.