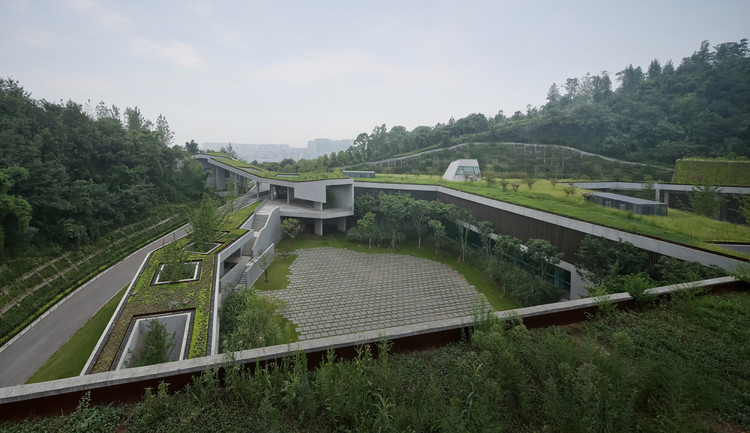 Text description provided by the architects. The community center is located in the mountains of Taoyuan Park in Chongqing. The starting point is attempting to merge new building outline with the existing wavy topography. Instead of building an “object” in the field, we hope to create an imagery of fusing architectural form and hilly landscape together. Green roof and green walls assist to blend the volume into its natural environment, and enhance the thermal co-efficiency of building envelope.

The relationship of in and out of architecture spaces is an important aspect in our design as well. Cultural center, athletic center and public health center are the three major programs. A continuous roof connects the three independent buildings into one unified volume. It slopes up and down responding to the hilly site. At the same time, it frames out two courtyards: a sloped garden, and a green plaza where community activities take place.

In traditional Chongqing architecture, Qilou (Veranda House) is a common strategy because of the rainy weather. Such space type is adopted into the outdoor circulation system of the community center. As a result, multiple paths connect two courtyards and perimeter of the building. They relate the inside and outside of architecture closely in both visual association and physical connection by large openings and spans.

The publicity of the community center brings various types of people including regular citizens, residents of neighborhood, and the users and staff of the community center. Our design therefore considers their stay, penetration, and interaction. They have different behavioral patterns in the building, such as strolling, gathering, performing, reading, tutoring, training, exercising, health consulting, etc.

People have designated space for such behaviors, while can also be able to actively interact with each other in an open and fluid space. We hope the community center can amplify its spirit, therefore it becomes a node to intrigue and generate public energy of urban life in the city.

The three major buildings have their own atrium where large skylight introduces natural light into the deep space. Openings, windows, cantilevers and corridors blur the boundary between the interior and exterior of architecture. Thus, merging the whole space together with the sky, mountain, trees, sunlight and breeze can eventually create a lively co-existing relationship of artificial structure and natural landscape. 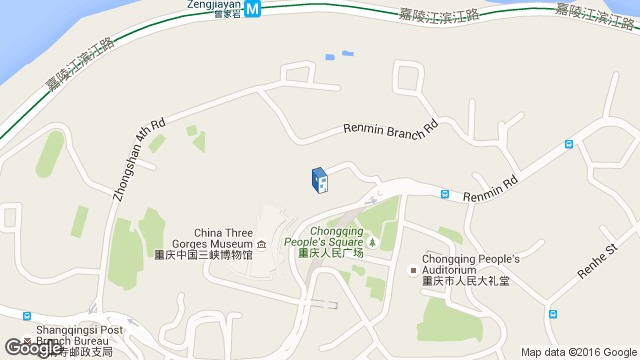 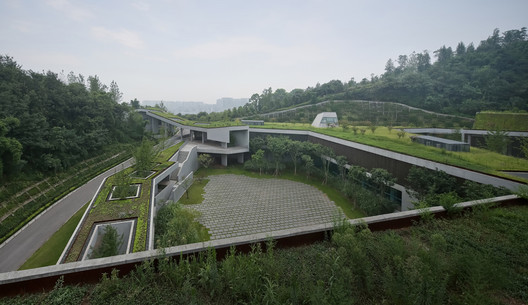