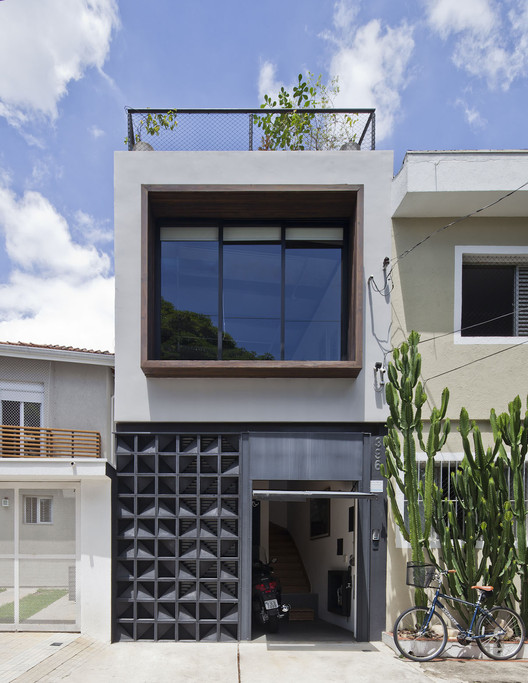 Text description provided by the architects. The client purchased a deteriorated townhouse where she would live alone. The refurbishment project should adapt the house for the needs of the future resident. For this, the usual order of a residential program was reversed, so that the ground floor area is the private area and upstairs is the social area.

The door can be opened in two ways, for pedestrians or motorcycle, since the original home entry was turned into a small garage. Beside this are the private rooms: bedroom, closet and bathroom. The lattices on the facade in conjunction with the zenith opening created between the bedroom and the bathroom, where there is a small garden, allows natural light to enter and cross ventilation.

The living room and the kitchen are on the upper floor, where there is also an external area made of ‘orsometal’ floor to allow the passage of light to the lower level and having a micro laundry, which functions as a cabinet and can be completely closed.

The prospect of the design was set to bring amplitude to the narrow house, opening the interior to the street and the garden in the rear area. Situated in an area full of trees and having open views to the horizon, two window frames has been built – in the front and back sides of the second level ‐ to allow visual permeability, natural light and the presence of the trees inside the house. On the front, the wooden frame is extended becoming a seat place for contemplation.

Also in the second level, chopped bricks contrasts with the new intervention and the colors adopted in furniture creating a consistent dialogue between the old and the new. The roof has been removed and a terrace is made with wall panel ‐ supported by a new structure ‐ which was waterproofed and received a new floor, conforming an outdoor living space that previously did not exist in the original house.