Text description provided by the architects. The new Poggio Picenze community centre was born to replace the old structure of social aggregation, located in the historical centre and made unusable by the earthquake of April 6, 2009. To the Administration's appeal have promptly responded different realities including the Associazione Nazionale Cantanti, the group La Provincia Editoriale and the Salvadanaio per l'Abruzzo, while the construction company, the supplier firms and the designers are working reducing the fees.

After a first draft of the project, which included the location of the building in the place of the concrete pitch of the city park, in 2011 the city council has situated the community centre in a neighbouring sports area near the entrance, that is replacing the earthquake logistics coordination camp.   The design intent of the new complex is to revise the work "Grande Cretto" by Burri, built in Gibellina between 1985 and 1989, following the earthquake of Belice (1968) and realized in white concrete. The new centre aggregation maintains many characteristics of the previous project, but it also wants to convey new ones. To the desire of constructing a building respectful of to the landscape of Abruzzo, has been added the value of memory. In 2011, two years after the earthquake had taken place, a period in which the Italian civil society gradually forgot what happened in Abruzzo, the zig-zag volumes want to somehow evoke imaginary cracks, in remembrance of the earthquake occurred. At the same time, as the building is covered in wood and in green, the project aims at giving a positive value to nature, inspiring in its users a renewed confidence in it and in mankind; kids and the elderly gather together in a building integrated in the green, having the chance to nourish new hope for the future. The roof is covered with grass plots, and green are also the façades thanks to a series of coloured wires on which some vines climb, which are expected to be taken care of by the centre users.

The Community centre is capable of hosting about 130 people from both the town of Poggio Picenze and from the neighbouring villages. The Centre is built on one level only and covers about 240 square meters (internal net surface): there are the entrance hall, two multi-purpose rooms, the library with Internet stations, one music room, and besides, services, a store room and both open and covered spaces. Externally, the walls are clad with natural larch wood, the same wood that has been used for doors and windows. The main closed volume is sided by two other open buildings for parking four-wheeled and two-wheeled vehicles, they're made of steel structures cladded with larch wood-boards, which are also covered with coloured wires that support vines. 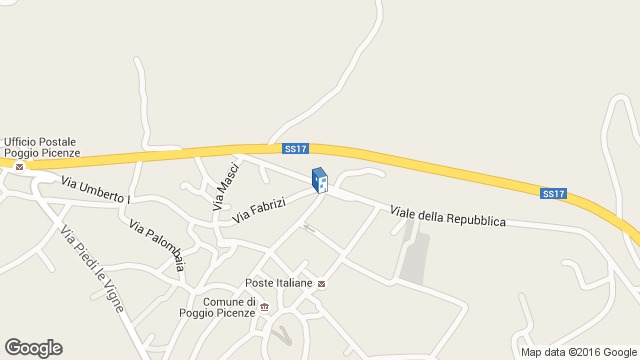