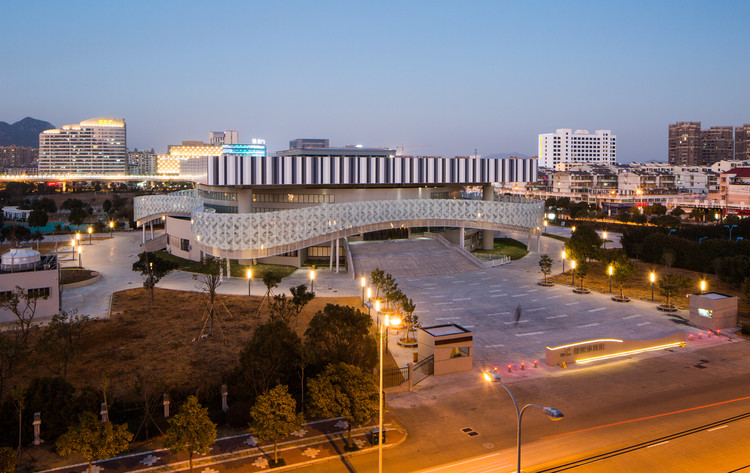 Text description provided by the architects. Since completing the ‘Yepaidang’ in 2010 - a waterfront promenade of 70 seafood restaurants lining Zhoushan’s south coast and attended by more than 2 million visitors annually, John Curran has been working with the Zhoushan District Government on a number of key regeneration projects spread across the archipelago - previously in his role as co-owner of Spark, and currently as design principal of John Curran Architects.

Early 2015 marked celebrations for the latest arrival - the reopening of the newly transformed 6,000 seat (10,000sqm) Sports Stadium. A Vision that reinvents and transforms the stadium into a first class venue, fit for the first time to host National League Games. Zhoushan Island is the municipal centre of an archipelago of islands, in Zhejiang Province, 200 kilometres south of Shanghai.

Alongside the interior upgrade, a new mezzanineprogrammed with public amenitiesare wrapped inside a new ‘Lantern’ skindraped around the perimeter of the stadium, connected by an outdoor viewing terrace, opening up the venue for the first time to overlook the green parkland in which it is set.

John Curran Architects promote visions for Neighbourhood Building. Zhoushan Island, inhabited by over 1 million people, is a dynamic and forward looking community. Spearheaded by Mr Zhou Zhiguo, ZhoushanPutuoDistrict Government Leader, client and designer worked closely together to deliverprojects with their own flavour unique to Zhoushan, projects that act as the social glue of a community undergoing rapid change and upheaval, in response to demands and opportunities from the mainland.

The flowing lines of the Lantern appear as billowing sails captured in the archipelago wind, and is inspired by the Islands great maritime heritage.  The freeform Lantern floats beneath the hard edge geometry of the roof.  The roof itself was remodelled to remove the original ‘Knife edge’ profile - long seen by locals as going against good ‘Feng Shui’ principals, and was reshaped into a striking ‘barcode’.

A new-build frenzy had taken hold of China, producing new developments on brownfield and greenfield sites at an alarming rate in response to rapid urbanisation –an estimated 30,000 people migrate from the countryside into Cities across China each and every day. In this context Zhoushan Sports Stadium, by opting to recycle the existing old structure, represents a reconsidered approach, a green approach minimising the developments carbon footprint.

John Curran commented ‘’The once dark and inward looking stadium has been transformed into a glowing beacon in the park, clearly visible from the elevated highway arriving into the City from the bridge crossing onto Zhoushan Island. This gateway landmark advertisesthenew found confidence a people with a rich maritime heritage,now looking to the future. A place that attracts, engages and inspires the youth of Zhoushan through sport.’’ 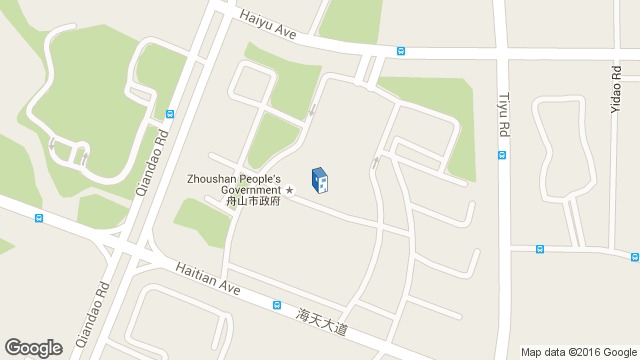 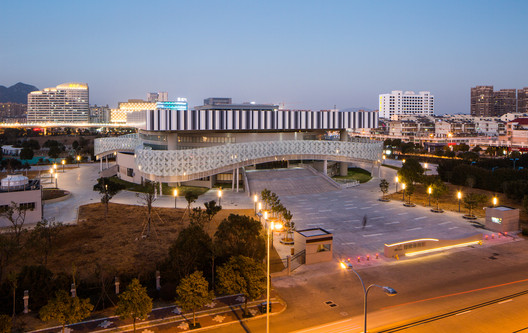