Text description provided by the architects. This house is the house of professor Jindo Park, who is an Economics professor with progressive disposition. Since his wife is also a liberal arts professor, it can be said to be a representative scholar family.  He requested the design of this house to live with his son who is majoring in jazz piano, next to the house in Teochon, where his mother is living.

Since they are the couple in academy, they will need own independent rooms for each, and a room for jazz piano sound is necessary, so this room shall also be independent. As such, the way they live had to be the decisive lead to compose the format of this house. That is, the structure making the house by gathering several independent areas, thus one daily newspaper covered this house, and introduced this house as the first article with the title of “well separated house” in the special series of “houses that change your mind”. Also, the legal restrictions on the houses in this area as farm houses only allowed main building with 100m2 and subsidiary building with 66m2, so necessity to build two house was also the basic condition for “well separated house”.

The rooms were called, not as living room, bedroom, study, or bathroom, with their purposes as in the western world, but called as inner room, the other side room, and room at the door, so our houses were the gathering of the rooms without specific purposes.  This not only makes all rooms to be independent of other rooms, but also showed the new keyword of contemporary architecture with their actual lives, since they were the indeterminate empty rooms that could be bed room if mattress is put, dining room if dining table is set, study room if desk is installed, and a cards playing room if blanket is layered.

Of course, the rooms with such format are directly connected to the nature for free ventilation and lighting, so they are extremely healthy. For those who are accustomed to the living in artificial environment using modern facilities in a closed space these days, this house has to be an inconvenient house.  But, such house is well suited in Teochon, which has beautiful scenery, and it is also true that once you are accustomed to such inconvenience, it becomes irrevocable joy.  ‘Inconvenient pleasure. May it be the memory that we lost? So it is the house of memory even though it is newly built, and it will be our old future that we must recover in this fragmented period. 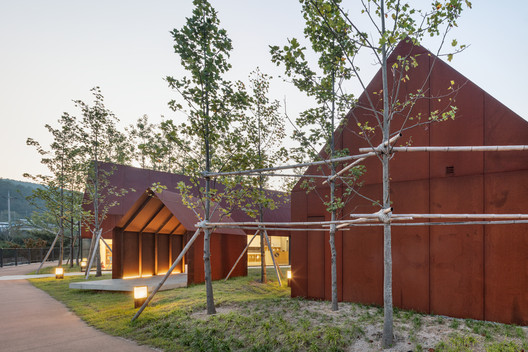