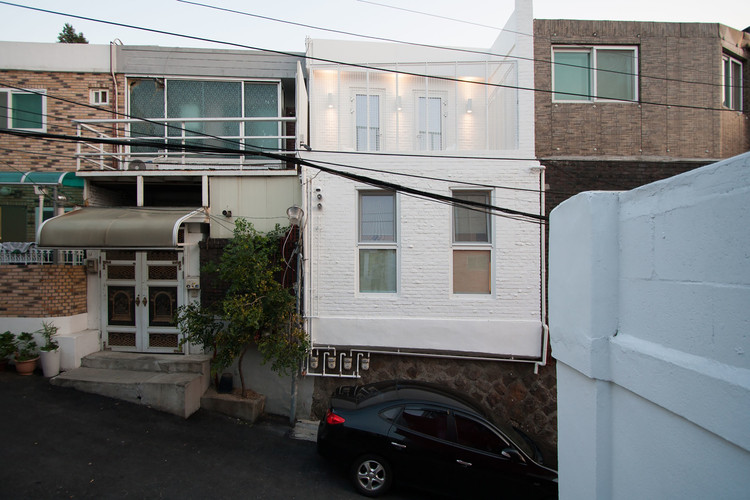 Text description provided by the architects. The house desired by the client is a place that gives a meaning to people who live inside or those who look from outside. It is a meaning as a rest like an impression made by an old pavilion, and as the one that makes people forget worries like a song of Kim, Gwang Seok and a beautiful piece of poem written by Cheon, Yang Hee.

Bingo House located in the foothills of Gyeongridan gil is a townhouse built for 10 families in 1977. The old house connected in the form of sharing the walls  between households was made up of the basement floor accessible only from the outside and the first and the second floor packed with rooms.

Though it still remains as a narrow space that fully reflects the exhausted life during the time due to rapid urbanization, it is led to today’s exotic and dynamic main street outside.

The client with the adventurous and experimental spirit didn’t care about the composition of existing housing from various cultures and experiences he acquired from years of life in foreign countries and wanted to have a space extremely adjusted to  my life.  The design also considered the changes in the life of the family members in the future in addition to  the designer’s ideas based on the client’s philosophy of a residential space.

The family of Bingo House consists of a husband who works for a company, a non-working wife, a son, a college student, and a daughter, a high school girl. Remodeling was determined with the charms of Itaewon like its unique openness, a symbol of multiculture, a geographical advantage as the center of Seoul, and convenient transportation.

Because the client couple is planning to get away from the city and live in the countryside in their old age after retirement, the drawing took the further changing life of the two young children into account and divided the traffic line/layout and designed a house of a new structure on the limited 45m2 area under the theme of a simple and pleasant life.

The front yard in the outside and the basement floor were brought into the interior spaces, and focused on the role and communication between family members having open as the conversation topic.

It is connected to the study of the husband - the desk is an extended design of the stairs - when going down the stairs in the center, which concentrated  on the convenience with the minimum traffic line.

It increased intimacy between family members through the integrated space between dining room, kitchen, and living room.

The space filled with bedrooms focused on close, that is respecting other people’s privacy and  finding merits of a small space. Children’s room and balcony/ One space is divided into two  rooms by a cabinet, and the marginal space of the balcony made the space enjoyable. The couple’s bedroom and the bathroom were also divided into  the minimum area and connected organically.