Save
Infographic: The Life of Le Corbusier by Vincent Mahé
Share
Or
Copy

French artist and illustrator Vincent Mahé has shared his most recent work with us -- a series of illustrations made for a special edition of Telerama magazine that depicts the life of the renowned Swiss-French architect, Le Corbusier. In just eight pages, the artist highlights the most relevant facts of this unforgettable architect's life. Expressed in green and pink tones, we can see key moments that have without a doubt shifted the course of contemporary architecture, with the extreme care and clarity that Mahé's work presents us.

View the eight illustrations after the break.


1904
“One of my teachers (a remarkable teacher) saved me from a mediocre fate. He wanted to make me an architect. I was 16, I accepted the verdict and I obeyed."

The teacher referred to was 30-year-old Charles L'Eplattenier, who was recently trained at The École des Beaux-Arts in Paris and a naturalist painter of Art Nouveau.

1905
First commissioned house for master engraver Louis Faller. "Pine" style. “At 17 and a half years old I made my first house. It is a horror of my birth country and I never looked at it again"
1907
His first trip to Tuscany, to the Florence Charterhouse in Galluzo, left him awestruck: “A truly human architecture made for the joy of man (...) a monk's cell would be used admirably as a work house, being the center of the completely independent, tranquil, impressive home."

1908 – 1909
He works in Paris with the Perret brothers. "In the work of the Perrets, I see what concrete is, the revolutionary forms that it requires. These four months in Paris shout to me: logic, truth, honesty, behind the dream towards past arts (...) Paris says to me: burn what you have loved, adored what you have burned."

1911
Traveling to the East, shocking! The mosques of Istanbul: "An elementary geometry disciplines the masses: the square, the cube, the sphere."
The Parthenon: “Pure creation of spirit, an emotional machine(...) a wise, correct and magnificent game of volumes under the light."

1912-1916
He returns to Chaux-de-Fonds: "I hate this city. And in theory the people too. I don't intend to do anything here, only disgrace myself." He constructs six houses, one of them la Villa Schwob, where he first created a process for industrial construction in concrete using standardized elements, which he calls "Dom-ino" (domus: the house, "ino" for innovation)."

1917 – 1920
He gets settled in Paris. While waiting to become the greatest architect of the 20th century, he paints in the mornings. His first painting: "The Chimney." "Painting is a terrible battle, intense, without mercy, without witnesses, a duel between the artist and himself. The internal battle unknown between the interior and exterior."

He meets Fernand Leger. Alongside the painter Ozenfant, he establishes the purist movement, creating the magazine "l’esprit nouveau"(The New Spirit), where he firsts uses the signature, Le Corbusier.

"It is necessary to establish standards in order to face the issue of perfection."

1924
He sets up his architecture office in Paris at 35 Sevres Street, with his cousin Pierre Jeanneret. "The straight line is the grand acquisition of modern architecture and it is a benefit. We must cleanse our spirits of romantic cobwebs".
In Corseaux he builds la Ville Le Lac for his mother, called "la petite maison," on the shores of Lake Léman. She will live there until her death in 1960 at the age of 101.

1925
Publication of «The decorative art of today»: "Each citizen must replace his draperies, his linens, his wallpaper, his prints, for a coat of white paint; in cleaning one's house (...) one cleanses himself."

After making the plans for the "Ville Contemporaine," an unbuilt modern city of three million inhabitants (1922), he creates "Plan Voisin," a plan for the radical modernization of Paris. "My task, my quest, is to pull the modern man out of disgrace, away from catastrophes, and place him into happiness, into every day joy, into harmony."

1928
He builds the Tsentrosoyuz Building in Moscow (Central Union of Consumer Cooperatives) and then the Pavillon Suisse in the Cité Internationale Universitaire in Paris.
"Working is not a punishment, to work is to breathe! Breathing is an extraordinarily regular function: neither stronger, nor softer, but constant."
He begins an often times tumultuous collaboration with Charlotte Perriand, a brilliant designer.

1929
On a cruise to Rio, he meets Josephine Baker. It was love at first sight. However, he will marry Yvonne Gallis, a model from Monaco, the following year. He theorizes about the "Five points of the new architecture": 1) Pilotis [stilts], 2) An open floor plan, 3) The horizontal window, 4) A free facade, 5) Roof gardens.

1931
Ville Savoye in Poissy: "The house is a box in the air, perforated by horizontal windows that continue all along its side." (Abandoned, it will be saved thanks to is reclassification as a monument in 1964 by André Malraux).

1936
Second voyage to South America aboard the Graf Zeppelin. He meets up with Oscar Niemeyer and Lucio Costa for the construction of the Ministry of Education and Health Building in Rio de Janeiro.

1940
Closes his agency in Paris. He heads to the Pyrenees with his wife and cousin, and later goes to Vichy where he recklessly and unsuccessfully attempts to sell his ideas of a "green factory" and of the construction of his "murondin houses.” He writes to his mother: "If the market is honest, Hitler can build his crowning achievement: the organization of Europe."

1943
First sketch of Modulor, with the silhouette of a six foot tall man (1,83m): "His value is this: the human has chosen numbers as its base ... Here is proportion! Proportion that brings order to our relationship with our surroundings."

1947
Breaks ground on the «Unité d’Habitation de Grandeur Conforme», called the Radiant City, in Marseille. Becomes part of a group of ten international architects consulted for the construction of the United Nations Headquarters in New York. Constructs the Duval factory in Saint-Dié.

1950
First drafts for the Ronchamp chapel (submitted in 1955). "The church is without decoration, because is there a need for decoration when the building is in and of itself a plastic element?"

1951
He is dismissed from the contest for the construction of the Unesco Headquarters in Paris.  His cabin is built, "a chateau on the blue coast that is 3,66m x 3,66m," in Roquebrune-Cap-Martin. "What scandalizes my visitors above all else, is the toilet bowl in the middle of the room. Because this is one of the most beautiful industrially made objects.”

1952
Inauguration of the Cité Radieuse: "I have the honor, the joy, the satisfaction to submit to you the perfectly sized residential unit, the world's first demonstration  of a form of modern living space(...) The work is here, built, against disastrous regulations. Made for men(...)to put the sensational resources of the times to use in the home, that fundamental cell of society."

1953
Start of the construction of the priory in la Tourette (submitted in 1960) and of the Brasil House in the Cité Internationale Universitaire in Paris (1959).

1954
Delivery of the Court of Justice in Chandigarh. "It is an architectural symphony that surpassed all of my expectations, that shatters and develops in the light in an unimaginable and tireless way.  From up close, from afar, it is a surprise and a provocation of shadow. It is made of a crude concrete, from the mixer to the cement" (Letter to Nehru).

1955
Poem of the right angle: "The sea lowers itself again under the force of the tide only to rise again when it is time. A new time has opened, a stage, a period, a relief. So, will we have stayed seated at the cost of our own lives?"

October 5th, 1957
Yvonne dies. "Woman of great heart and will, of integrity and of purity. Guardian angel of the house, of my home, for 36 years."

February 15th, 1960
His mother dies at 101 years old. "The black car full of flowers, and my dear mother covered in roses and flowers in her casket left on the route towards the rising sun, miraculously free of cars. The snow was falling thickly, the snow was falling silently."

1963
Carpenter Center of the Visual Arts in Boston. His only building in the United States.

1965
He resumes the study of the monument of the open hand in Chardigarh.

August 25th, 1965
Le Corbusier drowns in the  Mediterranean in front of his cabin. A few weeks before, he foreshadowed it: "We need to rediscover man. We must find the the thick straight line, the axis that binds the fundamental laws: biology, nature, cosmos. The straight line, impassable as the horizon on the sea." 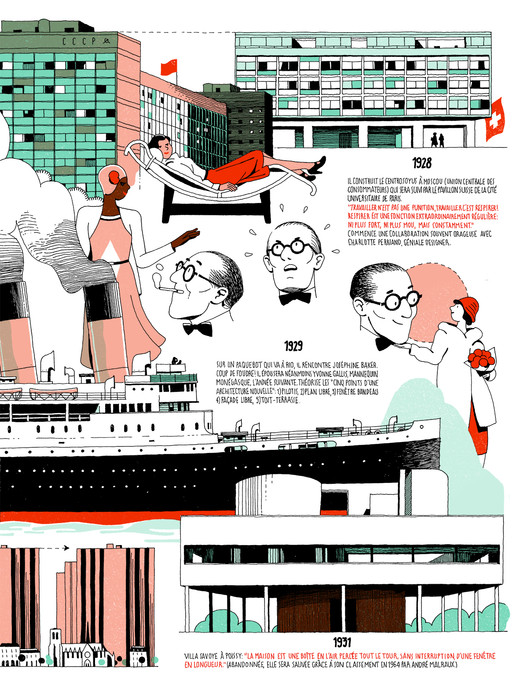