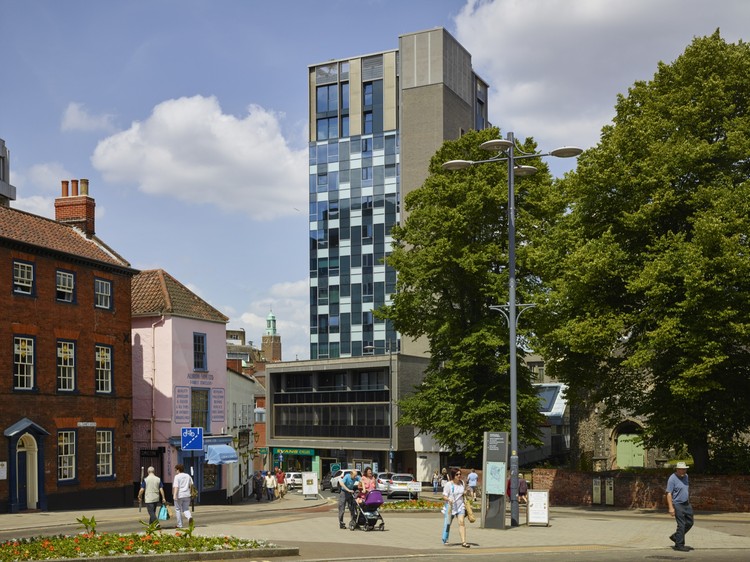 Text description provided by the architects. 5th Studio has completed the redevelopment of Westlegate Tower, one of Norwich’s most high profile buildings, together with its surrounding environment, into a landmark mixed-use site within the historically sensitive context of Norwich’s medieval city centre.

The transformation of the 1960s tower block into 17 residential apartments involved the addition of three storeys to the previously squat, 11-storey tower - creating a new ‘crown’ for the building. The new apartments each occupy a single floor plate and benefit from spectacular 360-degree views across the city.

The tower’s original promoters described it as “a pencil of light”: an optimistic symbol of the city’s modernity. After some years in use as offices, the building fell into disuse during the construction of the adjacent Castle Mall, with the building’s final tenants moving out in 2005. The vacant building caused much controversy within the city, with city planning policy calling for its demolition.

In 2012 the mothballed tower was purchased in a joint venture by Norwich-based FW Properties and Soho Estates. After winning the project through invited completion, 5th Studio’s brief was to explore how the site might be creatively reimagined as a mixed- use city block.

Rather than demolish the tower, the practice proposed to make it more appropriate to its setting in Norwich - the ‘city of towers’ - and to deliver for the city planners the desired urban connectivity which the tower had obliterated.

The site spans from Westlegate to Timberhill, encompassing a diverse range of landscapes and buildings, including the tower itself, a listed 17th Century building (20 Westlegate) and surface car parking on a gap site on Timberhill. All of which lie adjacent to the churchyard of the Grade I listed All Saints Church.

The new envelope deploys a series of patterns across its facades in order to provide an overall coherence and elegance to the tower, responding to its role as a city-scale landmark. The cladding was designed within the tight budget constraints of standard curtain walling, but by using a variety of glass finishes, metal mesh and cover strips, a skin was developed that changes radically with light conditions and the aspect from which the tower is viewed.

The re-making of the tower has been supported by a renegotiation of the surrounding landscape, including the renovation of 20 Westlegate, the addition of a new build modern town house, and the reinstatement of the lost Lion & Castle Yard as a public thoroughfare, reconnecting Westlegate and Timberhill, and re-establishing the historic grain of lanes, yards and passageways that characterise the city centre. 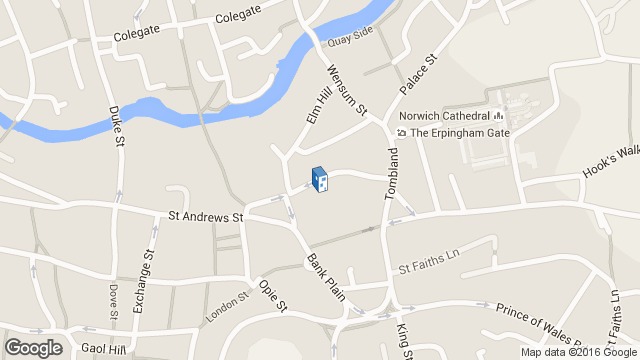