Save
House on the Sea / Pitsou Kedem Architects 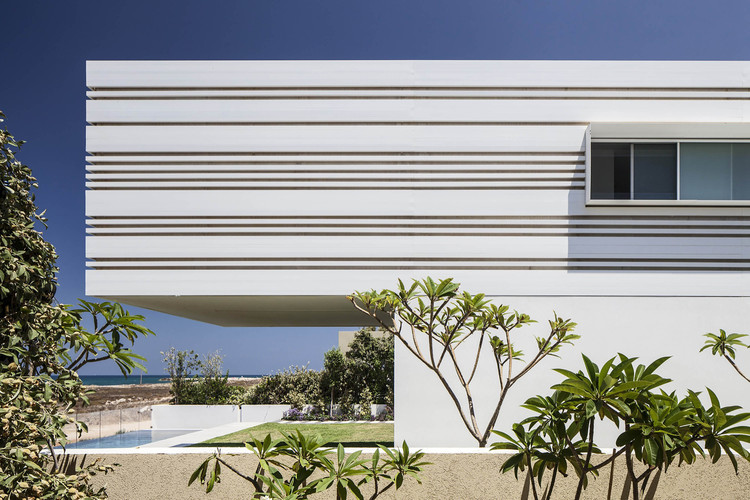 Text description provided by the architects. Light and horizon play together within the design of this home located on the mediterranean shore. The shining sun, a long wire thin line, and the blue of the sea serve as everlasting starting points that guide the architectural plan from a historic beginning to its current moment. Within this edifice resonates a rich history of architectural creation.

The vernacular of its design is embedded with western, modern principles, but also those of the Romans, that of the mandate period, and that of Israel today.

In the 1930s and 1940s it was the international style that reigned supreme and tens of thousands of buildings were made in its image, most of them in Tel Aviv and the rest split between Jerusalem and Haifa. The unique architectural style that eventually arose in Tel Aviv was a by product, among other things, of that imported by the students of German Bauhaus, which many Israeli architects had been schooled in.

The style gained acceptance in Israel for its universality, cleanness of design, functionality, and rejection of symmetry which appealed to the nascent nation’s desire to forge a new society while still remaining a part of the world.

Three main factors influenced the adaptation of global architecture in Israel. The economic milieu popularized cheap materials such as silica bricks and white plaster exteriors that further emphasized the sun of the blue israeli sky.

The building upon empty, open land void of an urban context allowed for a new and iconic style of low rise buildings which stressed the horizontal.

The climate influenced the size of buildings’ openings and encouraged long exterior terraces enclosed by socalled “apron walls” which directed the flow of air.

The language of design created through the terraces and balconies of Israeli architecture became themselves an icon of identity sharpened and perfected through reiteration. The balconies, horizontal handrails, and broad openings not only suited the desert climate but they provided a rich visual image without offending the style from which they were hewn.

Echoing within this home is the style of international architecture. Alongside the functional, modern character of its design one feels the builtin masses, the asymmetry, and the dismantling of space all of which project upon its urban environs.

The outer, linear envelope of the building evokes both the international style of the moment while subverting it to its own purpose; protecting the building from overheating under a desert sun.

Not only do the windows soak in a resplendent view but they provide the comfort of technological developments, which have emerged in the last few decades. An example of this are the westernfacing windows and doors who are shaded by a permanent frame allowing for the uninterrupted pleasure of those who peer through them. They act as a perfected detail of the exterior that innovatively frees the architect from the climatic restrictions.

In contrast to these frames, the southern windows are framed by thin, broad, metal lintel, creating an extra dimension from which to view the sea while simultaneously protecting the glass.

Then just as today the horizon which disappears into the expansive blue before us provides a sense of natural transformation. The details of the facade’s windows capture this very transformation through their observation of the surroundings. A life of comfort, organically promoted by the form of the building, resonates within the physical expression of its design.