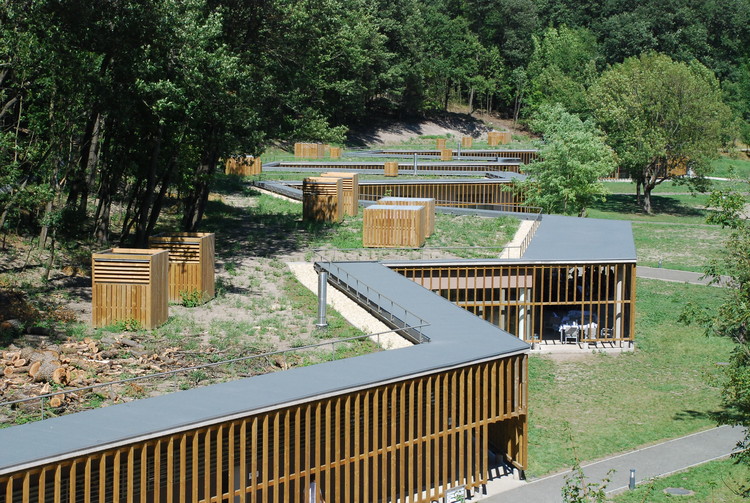 Text description provided by the architects. The Szentkút Pilgrim Center is located in the North-East region of Hungary, in the Matra-mountains, near Mátraverebély village. The place has been visited by pilgrims for almost 900 years because of the sacred water of the nearby springs. Many beleives in the miracle power of the water. In the XVIII. century a Baroque church and monastery was built near the springs.

An outdoor altar and worship place was added around 1930, plus a dormitory building for pilgrims. Seven years ago the Franciscan Order – who is running the place now – decided to develop the complex, renovate the historical landmark buildings and build new ones for visitors /approximatelly 200.000 per year/. The building complex contains seven elements.

The first is the renovated Baroque church and the Monastery. The church was cleaned by elements added in the late XIX. century, new floor pavings, benches and new led lighting were installed. Early XX. century altars were replaced by timeless, simple stone altars. The Monastery went through a more radical intervention: replacing all the doors and windows, roof structure, paving both inside and outside, adding bathrooms to the cells of the monks. A new courtyard was designed and built for the monks, it follows the ancient pattern of cloister gardens: it is surrounded by a covered-open corridor. The whole structure is made of concrete and wood.

The second project element contains the reconstruction of the open-air liturgical place with new stone pavings, new benches, new stone altars and new lightings. The high stone walls supporting the hillside was strengthen, a shop was built behind the buttress, selling religious souvenirs. All the stairs, balustrades, bridges were redesigned and rebuilt. New mosaic was made above the outdoor altar by a Jesuit monk artist, Marko Rupnik.

The third element was the total reconstruction of the pilgrim’s house built in the thirties. It contains 25 double rooms with bathrooms, plus a restaurant with a large terrace. Adjacent to the monastery, a new library is located ont he second floor for the monks. All the doors and windows were replaced in this building too. With a sliding shading system a new facade could be created.

The fourth, fifth and sixth project elements form an almost 300 m long wing in the foot of the surrounding mountain. It is a green roof building containing a large toilet complex for the visitors, a multipurpose room for 200 people and three dormitory buildings for pilgrims. In these buildings the rooms were designed for 8-14 persons. All the buildings are surrounded by an open-covered corridor, wrapped by a long shading wooden structure.

The seventh project element is the Reception Building.

It is positioned at the entrance of the complex, at the border of the sacred and profane zone. Its inspiration comes from this unique position. Sacred wafer is made of a pizza-size, thin disc made of flour and water. After removing the wafers of different sizes, a perforated plate remains, which is usually considered waste material. The plan of the Reception Building is gained from the transformation of this perforated disc – symbolising the lack of Christ. The building is sitting on a sloping site: while the curving reception side surrounds a semi-circular arrival square, the perforated „air-side” of the building is leaving ground, supported by columns with different length and diameter as loadbearing rules demanded. The arrival side is bounded by an arcade from which the following functions can be reached: toilets, a religious souvenir shop, an art gallery and an information center with a conference room.

All the pedestrian areas are covered with gray stone paving, the trees are surrounded by curved stone benches. The open-air wood structures are treated with high pressure injection. 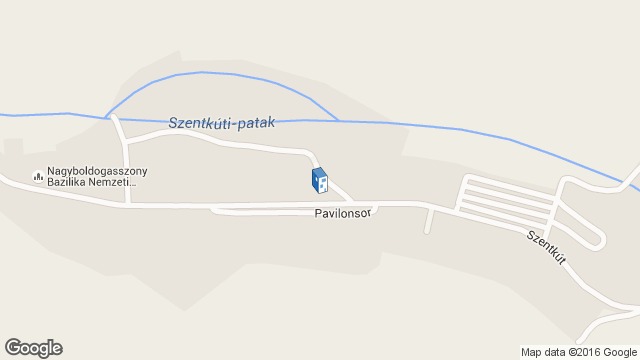 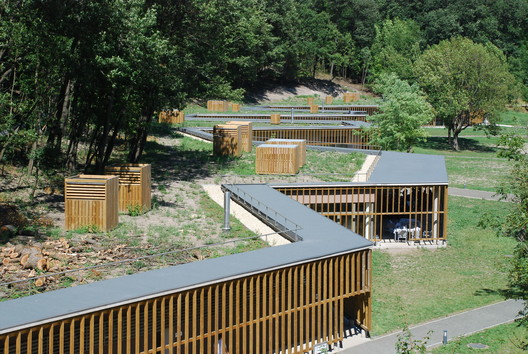