Studio Kuadra’s design for a new church complex in Cinisi, Italy has been selected by the Monreale diocese as one of the winners in the New Redemptoris Mater Church competition, held by the CEI’s National Service for the Building of Worship. The design, incorporating strong liturgical elements – including custom religious artwork – focuses on a relationship between exterior and interior. Read more about this proposal after the break. 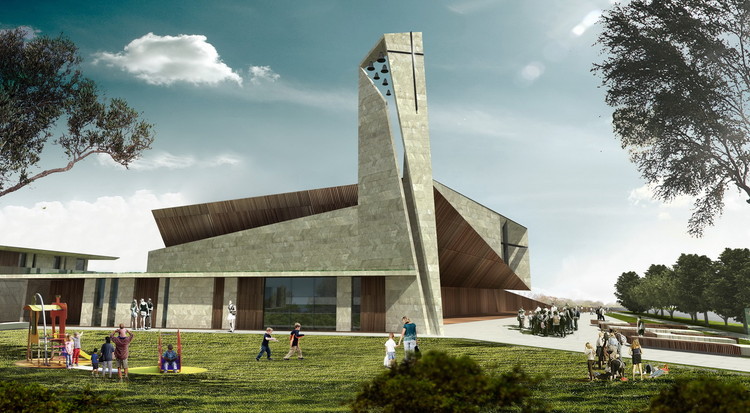 The body of the church consists of a monolith clad in local stone, flanked by a bell tower that seems to emerge from the ground. By using punctured roof gardens, seemingly underground areas are exposed to light. The nave of the church itself is lit by diffused light from holes in the stonework, arranged in the shape of a cross. A series of openings and windows, including a large window to the south, create relationships to the exterior, including an adjacent garden.

The project area follows a trapezoidal shape, the buildings dividing religious program from secular activities such as the child care and parking. Construction is planned to suspend the demolition of existing buildings until the new church has been built, with a buffer zone maintained to allow its safe use during this time. Accessibility was made a priority in the circulation of the building; traffic and pedestrian flows are deliberately separated in the master plan of the site, ensuring safety to gather outdoors.

Each church-goer’s journey is carefully laid out. As they approach, the courtyard of the church opens to them, with the figure of the Virgin Mary embracing the outdoors. From there, the liturgical elements of the church are laid out in narrative, following a strong iconography in its orientation. Horizontally, from the entrance to the altar, then from the portal to a large picture of the Virgin Mary; and vertically, toward the light descending on the assembly, the project follows a Christian logic in its arrangement. Throughout the site are specially commissioned works of art, including paintings of the life of Mary, a sculpture of the Madonna and a bas-relief on the portal depicting the ascension. 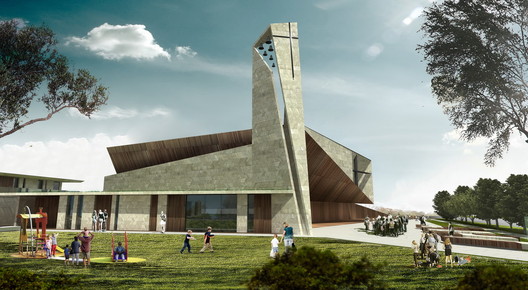