"From his first conceptual, colorful phase, Koolhaas has traveled through dirty realism, enlightened deconstructivism and commercial pragmatism, grafting Leonidov on Le Corbusier, hybridizing mambo fifties with dry sixties, and joining programmatic diagrams with sculptural volumes to end in the realm of heritage and history, ecology and sustainability, elements and the discipline." - Luis Fernández-Galiano

The first monograph that AV has dedicated entirely to the Dutch architect covers his work at OMA starting in 2000, the year in which Koolhaas was awarded the Pritzker Prize. Accompanied by an essay and 12 critical texts by Luis Fernández-Galiano, the publication covers the work built by the studio during the last 15 years. 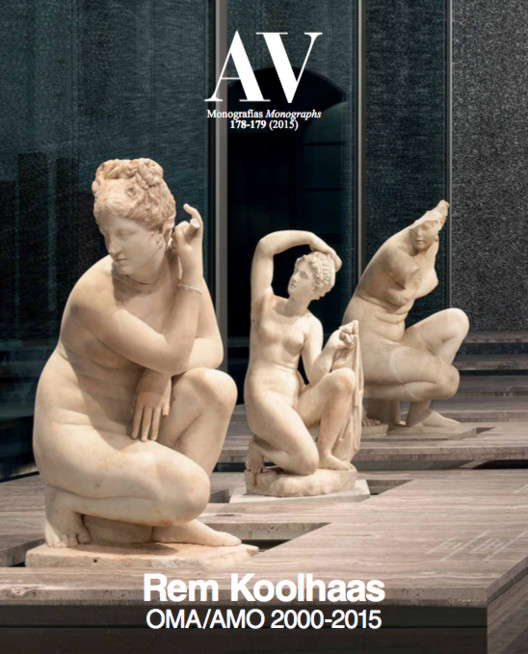 The late Koolhaas is not a Koolhaas lite. Having turned seventy, and forty years after founding his Office for Metropolitan Architecture in 1975, the Dutch architect and writer has given his vital and intellectual path a new turn. Architecture, however, is so slow-paced that the works gathered here still do not reflect that swerve, evident in his texts, interviews and exhibitions, like the much discussed Venice Architecture Biennale he directed in 2014. Depicted sometimes as a Houdini expert at escaping the chains he himself has tied, and stubborn advocate of the architect as a surfer of political and aesthetic waves, Rem Koolhaas shows the coherence of one who refuses to stay still when times change, offering, every step of the way, a faithful portrait of the world around.

From his first conceptual, colorful phase, Koolhaas has traveled through dirty realism, enlightened deconstructivism and commercial pragmatism, grafting Leonidov on Le Corbusier, hybridizing mambo fifties with dry sixties, and joining programmatic diagrams with sculptural volumes to end in the realm of heritage and history, ecology and sustainability, elements and the discipline. These displacements have kept intact the guiding thread of intellectual avidity, artistic excellence and a panoramic gaze that rises from building to territory, expressing its findings in texts and projects that combine the rationality of the real and a cautious amnesty for the existing with a restless penchant for graphic provocation, abrasive rhetoric and a defiant break with convention.

Though our magazines have followed Rem Koolhaas’s career closely since the eighties – as over two hundred items well show – this is the first monograph devoted to OMA. Several times postponed since the mid-nineties, it now includes twenty buildings completed after 2000 and ten projects in progress accompanied by an introduction that takes stock of the episodic conversation maintained here with the work of Koolhaas and with Koolhaas himself, whose latest period is commented in ten brief texts, and an appendix that illustrates our perception of his role with a dozen essays published at different moments of his career. Twenty-five years after the first cover in Arquitectura Viva, Rem Koolhaas and OMA are featured in an AV monograph that, if fate is in our favor, will not be the last.

Known as much for his theoretical proposals as for his provocative buildings, Rem Koolhaas has become one of the most influential contemporary architects. The first monograph that AV devotes to the Dutch covers his latest period, focused on heritage, history and ecology, and presents buildings carried out by his Rotterdam office since 2000, the year Koolhaas picked up the Pritzker Prize. With an essay and twelve critical texts by Luis Fernández-Galiano, the monograph includes buildings completed by the studio over the last fifteen years: starting with the Prada Epicenter in New York and closing with the Fondazione Prada recently inaugurated in Milan, the issue also features emblematic buildings like the Dutch Embassy in Berlin, the Seattle Central Library, the Casa da Música in Porto or the CCTV in Beijing, and recent openings like De Rotterdam or the Garage Museum of Contemporary Art in Moscow. Furthermore, ten projects in three different continents – among them the Taipei Performing Arts Center, the Musée National des Beaux-Arts of Quebec or the Axel Springer Campus in Berlin – take stock of the growing international presence of the Rotterdam studio, which has set up offices also in New York, Hong Kong, Doha and Dubai.