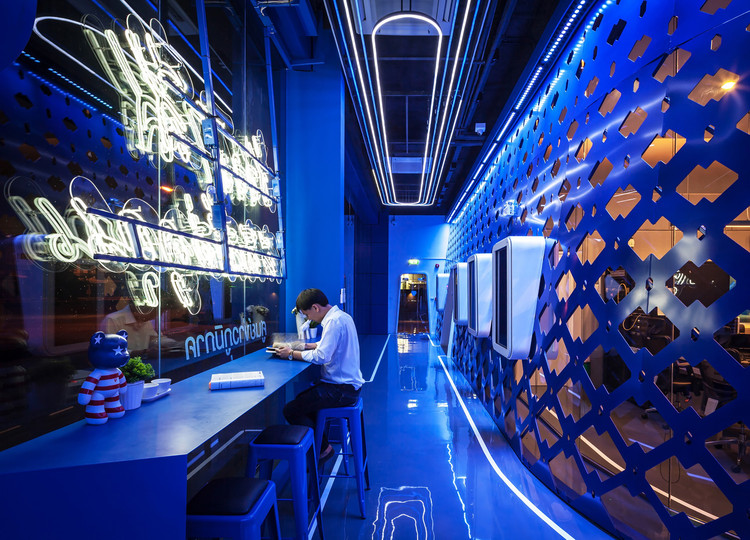 Text description provided by the architects. The Bangkok base multi-disciplinary design firm Apostrophy's collaborated with Airbase Architects has complete their new interior design for Channel 7 BBTV (Bangkok TV and Broadcasting Co.,Ltd.) by turning a retro gas station to an innovative broadcasting studio located on Mit-Tra-Parb highway at KhonKhean province, north-eastern region of Thailand.

Therefore the existing site as a “gas station” which has a long span structure, so the designer employ this straightness to do an open space planing but also solve the weakness of this site which is heat and noise with double layer skin. According to the design concept which inspired by the local food container wicker called “Kratip”. A cylindrical weaving rice container with full height double skin lid and air gap in between that contributed it as a good local thermal server which is similar to a modern technique of thermal insulation.

Then the next layer, A unique pattern wall which inspired from a local fabric pattern called “Jee Petch” (means diamond rocket) has been installed which divided and create an enclosed space into two major parts as following.

At first part is designed for professional TV studio which included a futuristic news rooms, a full set of lighting, camera equipments, computer servers and a control room. Even the existing site has a long span structure but the interference of sound is the major problem, so a diamond liked wall panel has been installed to prevent the sound from the road as well as a well design ceiling system prevent the sound from the existing metal sheet roof.

While the second part is divided for an office and some for a temporary exhibition space which covered by the Jee Petch-shaped perforated wall as same as the studio. This wall can create a semi- private space between 2 parts, allow the users to observe the activity of each others.

Finally, a highlight feature of this studio is Lighting design, a row of blue LED bars has been placed along the Jee Petch-shape wall that flood all the wall with blue light. While, the retro neon tube has been placed not only for a signage but also for the main ambient light at the ceiling. Moreover, all that light have been reflected by the exterior glass wall that shine the surrounding space as the lively landmark, especially at night.

In conclusion of this project, the designer can gain the advantage and improved the weakness of the existing site to turn a retro gas station into an innovative broadcasting studio which can build up a good cooperated image integrated with local identity. 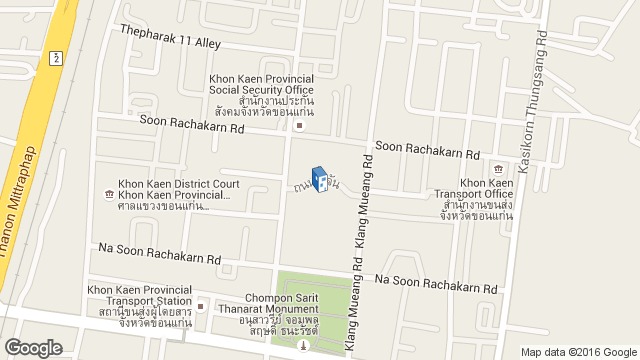