Parsa Khalili and ATELIERPAP have received an honorable mention for their proposal in a competition to design the Busan Hub of Creative Economy - part of the first phase of a revitalization project to spread industry, culture and jobs in the South Korean city’s North Port. Reacting to the changing demands of the creative economy, Khalili and Pap have proposed a structure comprising a plinth conjoined with a tower, wrapped in a grand staircase. 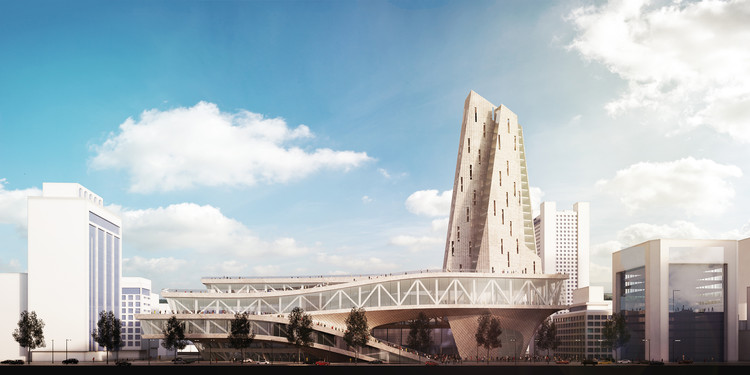 Embracing the interdisciplinary exchanges that continually change office culture, Khalili and Pap have formulated a plan not tied to an explicit order or arrangement of functions. The concept suggests new spatial forms “untethered to linear conceptions of circulation and activity.”

The design philosophy was based on curvilinearity, a metaphor of the building’s flowing spaces, and crystal formations, evidenced in the striated regions of ground, plinth, and tower, and the sections lying therein.

The raising of the plinth generates a variety of public plazas at ground level and preserves the highly pedestrian nature of the Busan Station area. Careful consideration was made to keep views and points of access open. Arterial connections converge at the center of the site, creating “a zone of spectacle and exchange between the base of the plinth and the foot of the tower.”

The grand staircase leads to a progression of terraces, increasing public space and offering access to a variety of hub-based and adjacent functions and amenities, including the main concourse of the train station. The terraces are organized around the interior space of the plinth, which includes a great hall that can be used as a single interior or split into smaller areas for greater specificity.

The tower contains a stack of open plan offices, made distinct with multiple double-height atria intended to inspire creative exchanges and promote public space. The building’s height allows for views across the North Port and of the surrounding city.

Winners of the competition were announced Thursday, October 8, as part of the Busan International Architectural Culture Festival. The full list of winning entries is available here. 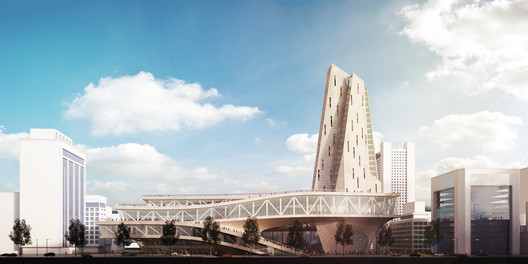 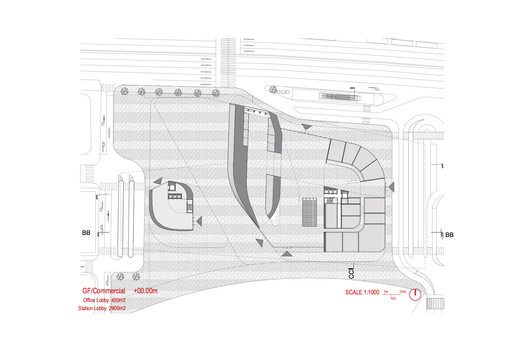