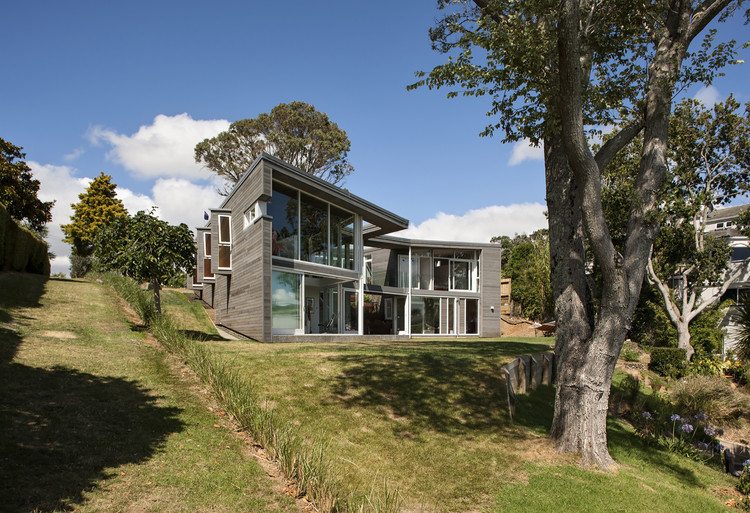 Text description provided by the architects. The site is a long stretch from a suburban Mellons Bay street, to a sandstone cliff that overlooks the gulf islands. It curls its tongue, flat to the street, convoluting to a natural spring and watercourse two thirds along the site.

An existing 1960s rectangular two storey house sat across the site like a dam, blocking any transition both visual and visceral, between the street and the sea. The house was in poor repair, largely due to a lack of provision in terms of the watercourse beneath. It was damp and poorly planned, with a startling abandon, it ignored the landscape it was anchored in.

The new house was designed for an engaging couple with 2 grown children. Despite the allure of the seaward end of the site, it was decided to pull back from the edge, to avoid the heroic gesture, to let the landscape re-engage with the sea.

Conceptually, the house consists of two elements, oblique and sliding past each other, held in stasis by a bridging element that traverses a section of ‘reconstructed landscape’. The placement and geometry were derived from a parametric investigation of the site in terms of the water flow, from the road to the sea. This was further articulated by a series of water features that terrace downward through the courtyard in the middle of the house and connect to the natural watercourse below.

1)  Adaptive re-use. Much of the original house was recycled and reused on site. The floor boards and weather boards were used in construction, the steel beams and stone cladding from the original basement were used in the landscaping. An oak tree that stood on the site was chopped down, milled and the timber was used for the kitchen cabinetry.

2)  Rainwater harvesting. The rainwater is harvested and stored in a 3500 litre tank beneath the house - utilising the basement area of the original house.

3)  Solar. Solar energy is used for the hot water heating in the house. 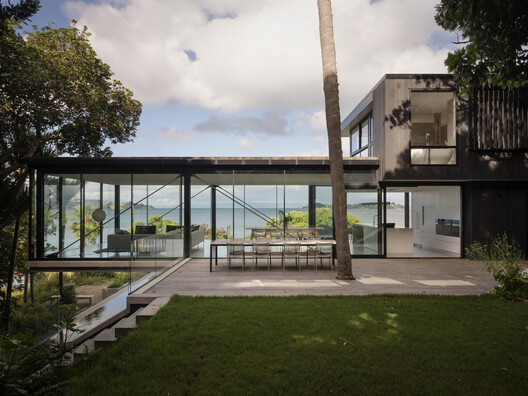