Perhaps the only material on the architectural market known for its "thirst," ultra-porous concrete is being hailed as the future of urban water runoff management for warm climates. The emerging material reached mainstream popularity in recent weeks thanks to a viral video depicting an apparently ordinary car park absorbing an inordinate amount of water; 1.2 million views later, the video has ignited debate on viability and possible uses for water-absorbent concrete.

Ultra-porous concrete is gaining a foothold thanks to extensive research being conducted by architects and engineers around the world. Known for its rainy climate, daring use of innovative materials and unorthodox architecture, it comes as no surprise that the Dutch city of Rotterdam has embraced water-absorbent concrete for testing. 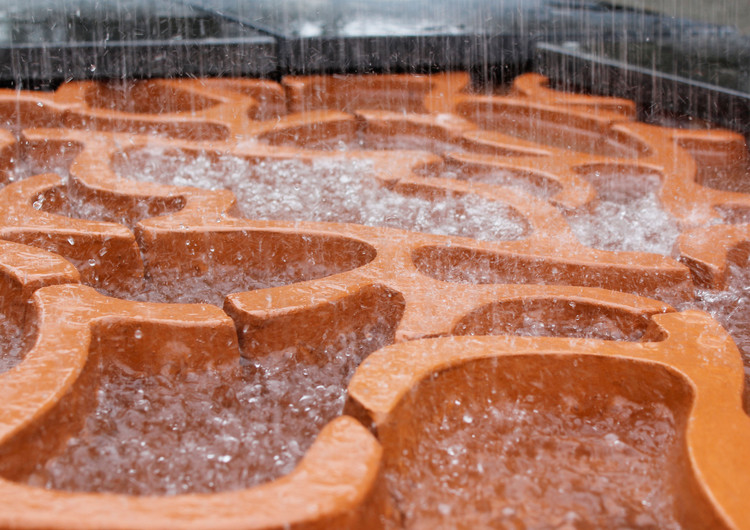 The Netherlands receives an average of 800 millimeters of rainfall annually, requiring significant infrastructure to avoid widespread flooding in urban centres. Dutch people have developed an affection for their signature weather, consequently inventing products to simultaneously celebrate and divert excessive rainfall. Eindhoven-based Rainaway has unveiled a series of Japanese-inspired water-permeable tiles designed to gently drain water through a combination of solid and porous concrete.

Designed intentionally to slow rainfall runoff, Rainaway tiles replicate the natural water cycle. The tiles feature a whimsical pattern of solid concrete that forms a grid of collection pools for runoff, ultimately draining through a porous base of rocks into a gravel reservoir below. Similar to material by UK-based company Tarmac featured in the viral video, Rainaway tiles are designed as a conduit for water drainage rather than a sponge - however by contrast to Rainaway's handcrafted tiles, Tarmac produces large-scale infrastructure using the same highly-porous concrete recipe. Created by pouring and molding large pebbles to form solid surface, the porous material emulates the strength of concrete with the density of a sponge.

Porous concrete is not without faults; for example Tarmac warns that their Topmix Permeable material cannot be used in cold climates due to expansion from freezing, but the benefits seem to outweigh the drawbacks. The solutions by both Rainaway and Tarmac have significant potential in climates with consistent precipitation like the Netherlands and the UK, creating the capacity to fight flash floods and avoid evacuation.

Rainaway tiles are currently installed for testing in partnership with the City of Rotterdam along one of the city's boulevards. Find out more about the installation and the material here.