Wiel Arets Architects (WAA) has revealed plans for a mixed-use "Bahrain Bay Tower" in Manama. Reaching heights up to 170-meters, the project is comprised of two residential towers connected by a plinth of retail, office, parking and public park space.

"The plinth’s ground floor is publicly accessible and is mostly composed of retail and public lobby space," says WAA. "Due to a division of these ground floor spaces, along the site’s southern edge, a breezeway was created that allows the public to traverse the tower’s entire site - without entering its interior - which serves to infuse the tower’s immediate context with pedestrian life. In this way, the ground level frontages of the tower’s retail spaces are maximized."

The tower will offer a range of housing options, from one- to three-bedroom units. Circulation is designed so that each unit has two walls of glazing and operable windows that allow ample access to light and air in each living space.

"Due to the extensive amounts of glazing on the tower’s façade, a panel-like system of sliding aluminum louvers serves as an additional layer of privacy and shading - in tandem with the façade’s treated glass, and the covered exterior terraces. Together, these elements protect the tower’s interior from passive solar gain, while the louvers lend to the tower, an ever changing and thus chameleon- like appearance, due to the reflections they catch from direct sunlight." 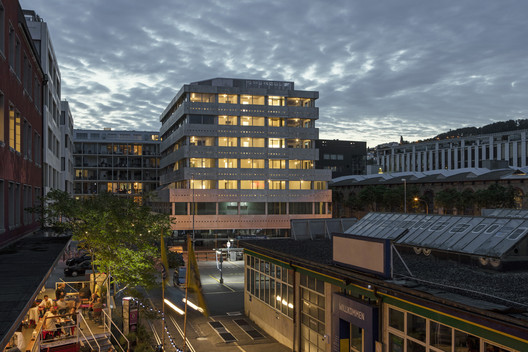