This (terrifying) 300-meter-long bridge is the first in China to be made of all glass. Suspended 180-meters above ground between two cliffs at Hunan's Shiniuzhai National Geological Park, the Haohan Qiao - Brave Men's Bridge - was originally meant to be wood, before being constructed with 24mm thick glass that is 25 times stronger than normal.

"The bridge we build will stand firm even if tourists are jumping on it," said a worker to China News Service. "The steel frame used to support and encase the glass bridge is also very strong and densely built, so even if a glass is broken, travelers won't fall through."

Hunan is set to open the world's highest and longest glass bridge later this year. That bridge will soar 300-meters above and 430-meters across a section of the Zhangjiajie Grand Canyon, an area northwest of Shiniuzhai. 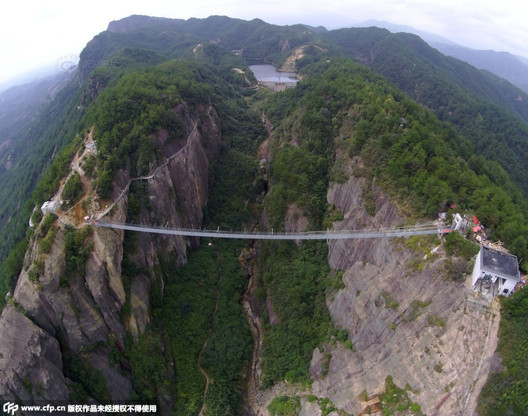