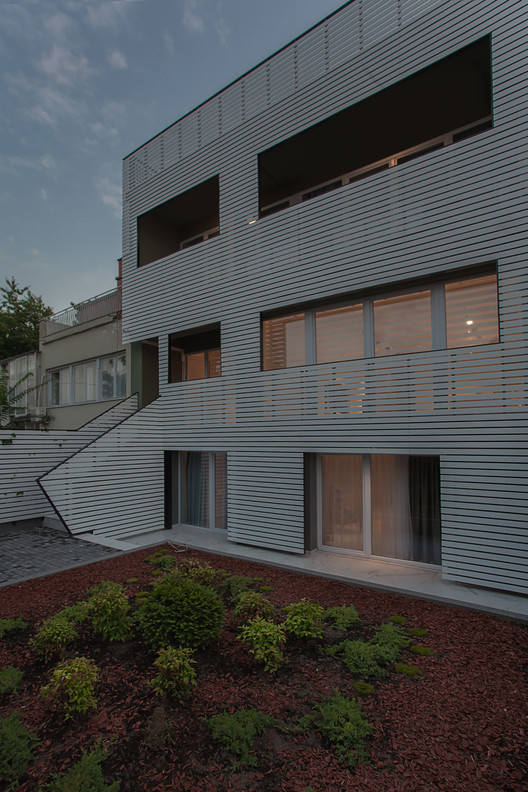 Text description provided by the architects. The house is situated near the historic district of the Municipality of Chair in the City of Skopje, between the Old Bazaar and Skopje’s Fortress. It is one of four houses in a row, situated in an intense urban context. The house was built in the 60s of the last century, with modest and clear modernistic appearance. Unfortunately, it was in a devastated condition.

The four houses were built all at once, with a common constructive system, which meant that any physical intervention was extremely complicated. However, with carefully assorted methods, it was possible to reanimate the house without causing any damage for the neighbors.

The structural logic of the house was kept, although reinforcements were made to the bearing elements of the construction, such as main columns, walls and all slabs. In addition, steel construction was added to support extensions on the back side of the house and the roof. All openings were revised and new ones were added, in order to bring more light inside.

The basement, once used only for storage, now accommodates a large living room and a dining room completed with kitchen in direct contact with the backyard. A new master bedroom is added on the rooftop, with access to two large terraces with extended views to the old bazaar and Skopje’s cityscape.

Since the intervention was very obvious and dominant, a new layer of cladding envelopes the house. It creates new levels of interpretation, new micro-climate control and leaves readable the former architectural syntax.

This approach represents a possible recipe for revitalization of rich modernistic architectural heritage of Skopje.