The Linda Pace Foundation has unveiled plans for a new building designed by Adjaye Associates. Planned to open in San Antonio, Texas in 2018, "Ruby City" will house the Foundation's growing collection of contemporary art. The two-story structure, clad in "crimson-hued panels of precast concrete with glass aggregate," will be distinct with its "dramatic rooftop of sloping angles and skylights that rise to varying heights and echo cut-away spaces at the building’s base."

“When I visited San Antonio in 2007, and met with Linda [Pace], we sketched out ideas and together, we envisioned a building that would resonate with her dream of the Ruby City," described David Adjaye in a press release. "Like a city, the design offers an organic, heuristic encounter with the Foundation’s works and my hope is that it will become a place where artists and the wider community can be inspired to realize their own dreams through a meaningful experience with contemporary art.”

Linda Pace was an artist, collector, and philanthropist who died of cancer in 2007. She was "driven by the belief that art is a vital social force," says the Foundation.

Ruby City is slated to break ground in 2016. 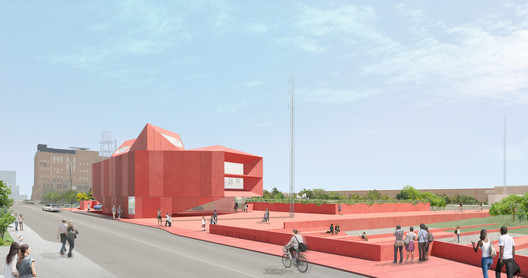