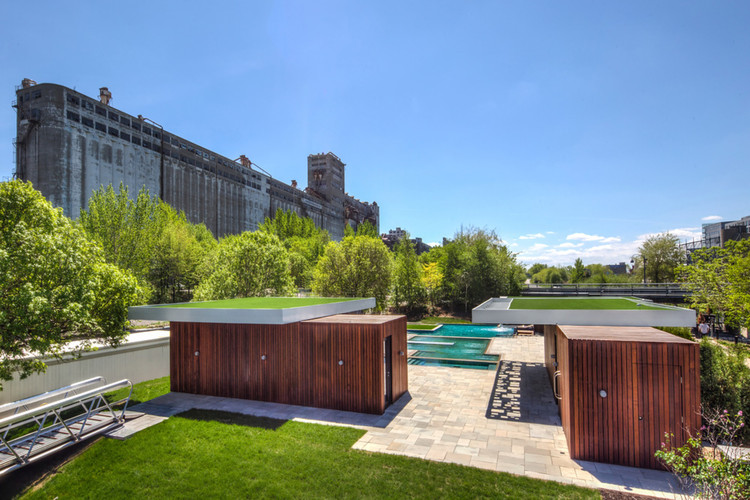 Text description provided by the architects. Located in the heart of Old Montreal and docked at the Port of the Saint-Lawrence River, Bota Bota spa, is a major tourist attraction. The port context is rich in history and has a unique character in Montreal. The site is surrounded by water, vegetation and the massive grain silos 5. MU Architecture was commissioned to design an oasis of relaxation in this exceptional place, a little heaven in the heart of the city. It is between the boat-spa, the river and the elevated railway that Bota Bota Gardens take shape.

The mandate was to create a relaxing area on the mainland and thus give customers access to the exterior. The project was to become the favorite spot for tourists and locals looking for silence, cooling and shade in the hot summer months, but also a friendly place to swim outdoors in winter with outstanding views on the downtown skyscrapers.

MU Architecture proposed development concept was for a series of green steps that gradually link the boat and the ground. In choosing the container as the main element of construction, there was a way to showcase the concept of loading dock and create a nod to the port context.

The layout of the large dock included many technical challenges. Considering the site is surrounded by water, access to heavy machinery was impossible. The railway to the south and dense vegetation made it almost impossible to drive a truck or a small vehicle on site. It was also necessary to build in a semi-permanent manner so that the buildings can be assembled and disassembled easily. Thus only shipping containers, in addition to being a great opportunity to recycle, could be brought in by barge and compose all the volumes that were to house the relaxation areas, steam bath and engine room.

These "pavilions" were therefore arranged to create a course oriented towards relaxation and discovery. The architectural intention was to create a simple but yet elegant set of monolithic volumes that frames strong perspectives. The volumes are positioned in order to create continuous alignments with impressive views on the grain silos, Habitat 67, the Old Port and the skyscrapers of the city. Large green roofs cantilever to create sun animated shadows that help generate this oasis feel. Soffits of these roofs consist of large perforated metal sheets with a laser cut squares pattern that provides a set of shadows dancing to the rhythm of the movement of the sun.

The first volumes greet and direct us to the center of the project. A ray of light draws us to the pool, the central element of the project. The containers thus revolve around this great body of water divided into three basins (cold bath, large hot tub and large pool). The orientation of these basins allows for a maximum of sunlight throughout the day and their irregular shapes generate different areas in order to maximize intimacy. Everything is spread out over a hundred feet and forms the largest non-public outdoor pool in Montreal.

Surrounded by stone pathways, the pool is punctuated by rest areas, an outdoor fireplace and a yoga platform. It is thus possible to bask in a huge outdoor pool, in closed spaces to relax or take a sunbath under the tree canopies at the edge of the waterfall. The infinity pool overflow drainage system allows for total integration at ground level and provides certain spirituality. The place is a haven, an oasis of greenery and rest in the center of the city.

The materials were deliberately kept to a minimum of three. Stone is everywhere on the ground and gives the effect that the basins were entirely excavated into rock. IPE was used due to its resistance to harsh weather and low maintenance. It covers all the containers to soften their impact and to remove the industrial aspect that is intrinsic to them. The roofs were all cladded with white painted steel panels, bringing back that a light industrial touch to the composition.

The idea behind the green roofs was to integrate the project into its environment and minimize heat gain. Although synthetic turf was laid temporarily, the impact of the green platforms views from the top of the boat is impressive and brings some discretion that piques our curiosity. Everything was prefabricated in a factory, disassembled and reassembled on site. Over the mechanical room, the roof becomes a waterfall that drops directly into the pool. 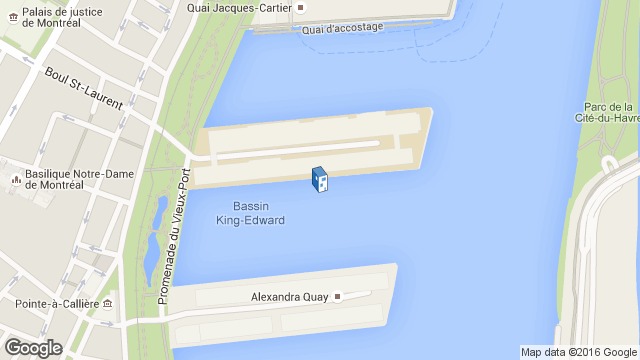 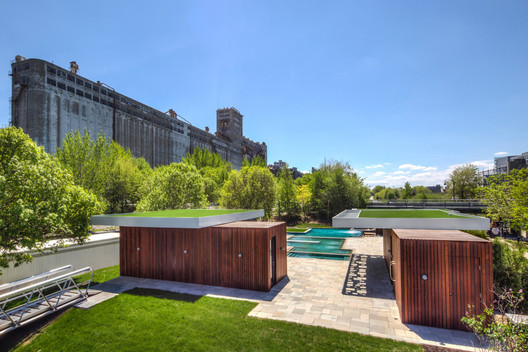