Santiago Calatrava's Innovation, Science and Technology (IST) Building at Florida Polytechnic University has picked up another award, this time being named "Project of the Year" by Engineering News-Record. The "centerpiece" of the new Floridian university, which was also masterplanned by Calatrava, the 162,000-square-foot building was recently awarded "Best in Steel Construction" by the AISC.

“Educating, particularly young people, is one of the most noble tasks that exist,” said Calatrava in response to the award. “The Innovation, Science and Technology Building aims to be itself a tool to achieve the highest level of education for young people.

"In addition to that, I hope that this building will, in time, be seen as a visible symbol of the innovative spirit of the community, a gateway and become a stimulus to the newly emergent high-tech powerhouse economy of Lakeland and Polk County in Florida. The important awards received by the project thus far reassure me that, with good fortune, this could be the case.”

The IST serves as the University's classroom main building, offering 26 teaching labs, 11 research labs, two seminar rooms, 17 group meeting rooms and an 11,000-square-foot common area. It is distinct for its intricate kinetic shading system and aluminum "wings" that cools the structure's curvilinear roof. You can learn more about the project, here. 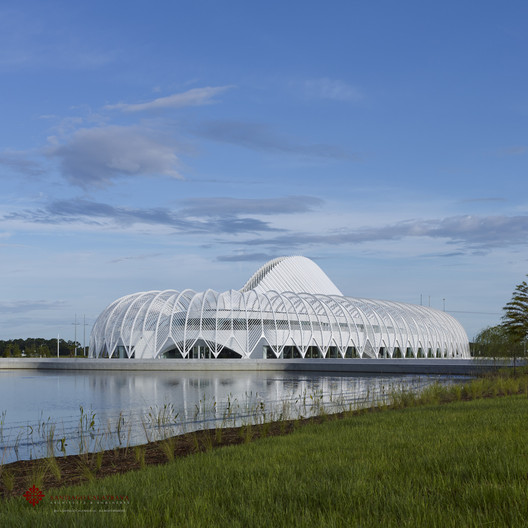