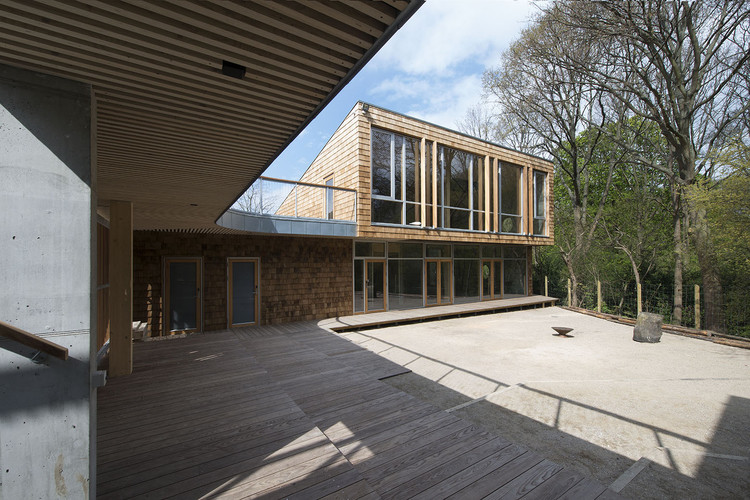 Text description provided by the architects. The Site

The new scout hut and village hall with the related outdoor play area is located behind the park, Søndermarken in copenhagen. The plot lies stretched out between the road and Søndermarken. It is at the narrowest point not more than 10 meters, but in return it is 80 meters long in east west direction. The plot has a level jumps in the same direction about three meters. The prospect of the large trees in Søndermarken is to make the plot quite unique.

The central outdoor space acts as arrival and the focal point of the house's joint activities. The space is partially covered by the building cantilever along the facades. The outdoor space are covered with wooden decking and the drain gravel surfaces. The fireplace is located centrally between the two building masses and the park's trees. The outdoor space has a difference in level east-west on a half meters. This is the terrain compensated with ramps and seating steps. The room's three facade is the park's trees and shrubs, with its density gives the feel of being in the middle of a clearing in a forest.

Scout workshop (smallest building to the east). Scout workshop consists of toilet and shower facilities for runners and scouts. two smaller patrol room and a large workshop. In addition there is a mezzanine where there is access to the roof terrace. Patrol rooms provide scout leaders the opportunity to divide the children into small groups and low transverse process. Each is the two space is 12 m2 and can be furnished with table chairs and bookcases. All rooms have entrance from the courtyard.

The workshop is intended as a more raw space. The gable of the space to be opened up to a sunken courtyard that can act as out of the workshop and thereby give the room an out-inside character.  Here you will be able pig and make all sorts of different experiments. From the sunken courtyard provides a direct connection to the playground. Over patrol the rooms is a located a mezzanine with the possibility of visitors scout groups from other parts of the country can use the house to stay in. The mezzanine level location means you inside will feel like sitting or lying in the middle of the canopy. As last room is located a toilet and bathroom with large anteroom. The space is primarily intended to be used by jogging clubs that use Søndermarken.

The village hall. (main building to the west)

Assembly house consists of a large function room with fireplace, large open working kitchen, storage / technical room, entrance and cafe area, mezzanine above the living room. From the courtyard there is access to a small depot and a small toilet. Disabled toilet and changing facilities with access from inside the anteroom which also acts as custodian. Meeting room is centrally located with direct contact to the park's trees and outside the common room. It will be possible to open substantial parts of the facade parties against the outdoor space, creating a great space that connects the inside and through the terraces.

Cafe and the kitchen is in open communication. The stairs to the mezzanine is located as an element that contributes to the room snugly Kitchen and cafe with seating space. Mezzanine is in contrast to the mezzanine in the workshop building, with a greater ceiling height, so as to allow for setups and more formal events. From the mezzanine there is access to a south facing roof terrace. In addition, it is possible from the mezzanine floor looking down into the living area. House roofs are planted with sedum herbs in color ranges and shimmers with the seasons from light green to red. This gives the building's fifth facade one texture that is in keeping with the surrounding green landscape. The roof plate will be visible from the street, but in particular could be observed from the neighboring settlement's terraces and windows.

Interior wall surfaces are untreated in-situ cast concrete and plywood peeled pine with fields of acoustics. The floors are made of polished concrete sealant. On the mezzanine and interior stairs used bamboo plank. In the toilets, depots and technique used painted industrial floors. Ceilings are made as acoustic ceilings with LVL battens and plywood peeled pine Windows are inside the larch with outer sheath of natural anodised aluminum.

Outside the building in the in situ concrete with visible formwork. Wood facades are of Canadian cedar shingle, while slats are Canadian cedar. Terraces and roof are made of thermo ash. Rooftops planted with sedum herbs. Protection is in galvanized and stainless steel Downpipes and water flumes and Div. flashing is made of zinc.

The building meets the highest standard for public buildings 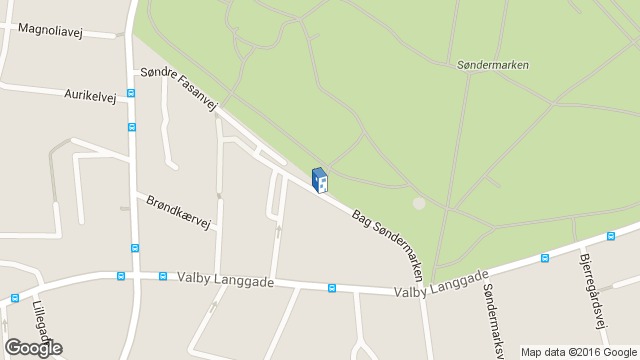