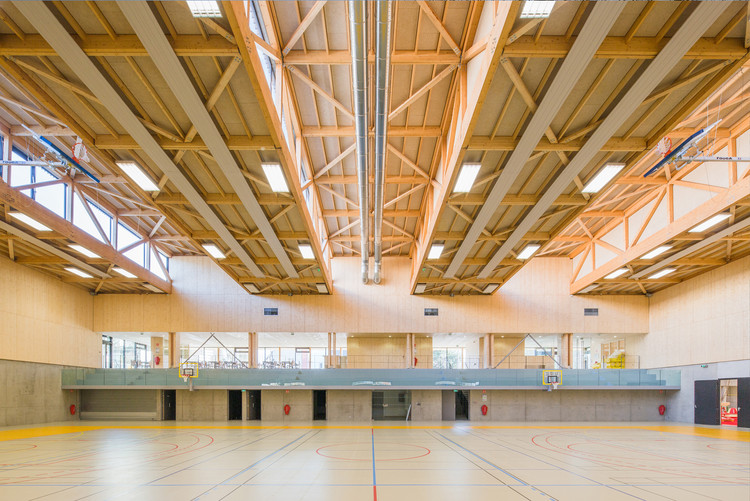 Text description provided by the architects. The Hacine Cherifi gymnasium (1) forms part of the same development as the Paul Chevallier schools complex, another Tectoniques project for the town of Rillieux-La-Pape (69). Next to the schools with their pleated, green roofs, its size makes it an imposing, yet silent, neighbour.

The building houses two sports halls and support services over a total surface area of 2,500 m2 with internal ceiling heights of 9 and 12 metres.

Faithful to the agency's values, the architecture uses a mixed wood/concrete structure without pretence or artifice, the wooden components being largely prefabricated.

(1) Hacine Cherifi is a boxer from the town who made history in 1998 at the Astroballe when he became the first French world Middleweight champion since Marcel Cerdan.

An active contribution to the public space.

The facility includes a gymnastics hall (880 m2, a multi-purpose sports hall (1,100 m2) and the spaces required to host the general public and sportspeople.

The volumes are organised very simply. The two halls are set at right angles around a block which accommodates all the support services. The terraces offer seating for up to 400 spectators, which overlooks the multi-purpose sports hall and opens out at the back onto the entrance area and the cafeteria which are clearly visible from the public spaces outside. The fully-glazed facade on the road, offers glimpses of the activity inside the facility without disturbing the sports events or training in progress which takes place below the cross-cutting perspective.

Scale adapted to the context.

In order to limit the structure's impact on the surrounding urban environment, the architects made use of the height difference between the street and the interior of the plot to integrate part of the building into the slope. This also allowed them to create at access at the top of the building (rather than the bottom which would lead directly into the sports halls). This made it possible to reduce the height of the building on the road by 6 metres. These dimensions match the scale of the neighbouring school and the residential fabric of the neighbourhood.

The building has a very simple shape and the facades are unadorned. Whilst the style of the schools is fluid and landscaped, the simpler, more sober gymnasium, in contrast speaks of stability and solidity. It occupies the northern corner of the development at the crossroads between two of Rilleux's major roads.

The main facade to the east on rue Salignat clearly states the facility's public status with a large, glazed facade, mounted with a cantilevered volume. At the rear to the west, the building is deliberately silent, as a residential programme is under construction and not yet finished. Towards the south it overlooks the schools, situated on the opposite side of a pedestrian alleyway which provides access to the schools and cuts across the development.

As in all the Tectoniques agency's projects, the construction system is both intelligible and visible. The raw concrete walls which run the height of the underground section of the building are left visible from the interior. Above these walls, the structures are all made of timber. The main structure is formed from a series of portal frames. These are composed of glue laminated spaced columns and beams with a span of 34 metres, placed on a 5.8 metre framework.

For the purposes of transportation, the beams were built in two parts, pinned and bolted together on site using metallic eyelets. Lifting and putting the beams into place made for a very dramatic stage in the construction process.

The 2000 m2 of components which make up the exterior siding are prefabricated into boxes, assembled using an external wall insulation system around the structure.  From the inside out, the system is composed of three-ply spruce panels laid over the battens, the OSB panels which make up the base of the boxes, the 36-cm deep box framework filled with straw, a 40-mm insulating woodfibre panel, the rain barrier and the cladding made up of three-ply douglas fir boards onto which timber tiles, also made of locally-sourced douglas fir, are fixed.

The beams are put to good use by alternately constructing the roof above and below the height of the columns. This system creates large, glazed, horizontal strips which face north and run the height of the beams. This provides abundant overhead lighting but avoids glare.

Flashes of red break through the monochromatic tone.

Light shades have been used to create a calm, peaceful atmosphere and ensure the facilities remain discreet. The floor is beige, the wall panels are made of light-coloured timber and the position of the lights and radiators fit into a carefully designed layout. The only colour is the red gymnastics equipment which creates a stark contrast with the overall monochromatic tone. 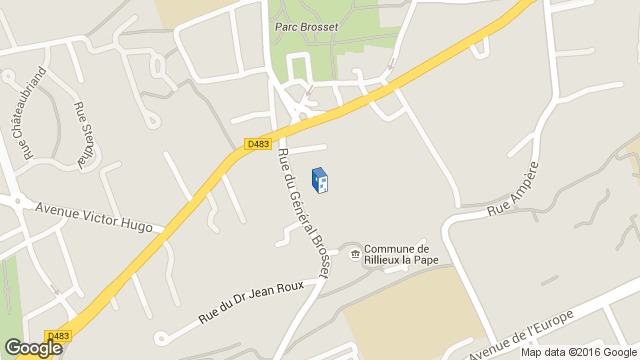 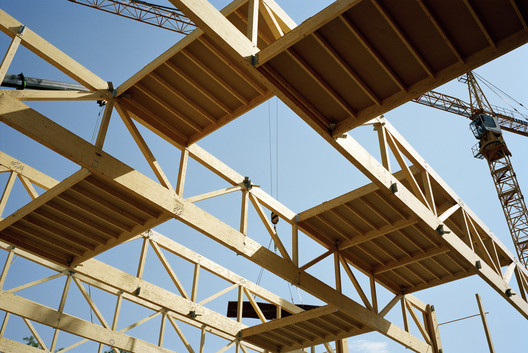