After several years spent broken and unusable, the local water source at Parque Urueta in the center of Chihuahua, Mexico, has been revitalized by the Instituto Superior de Arquitectura de Chihuahua’s (ISAD) Taller del Desierto student workshop. This year’s version of the annual workshop—called Urban SPA—has teamed up with PKMN architectures and Memela, as well as civil association Impulsados Capacidades and materials sponsor A+bien.

In an effort to create “a collective imaginary for the future,” the workshop began with initial ideas, like shaded areas for parents to drop off children for school, steps to link resting and sports areas, and bench maintenance actions. However, after neighbors voiced concerns about the park’s broken public water source, the workshop’s focus shifted towards the Urban SPA concept. 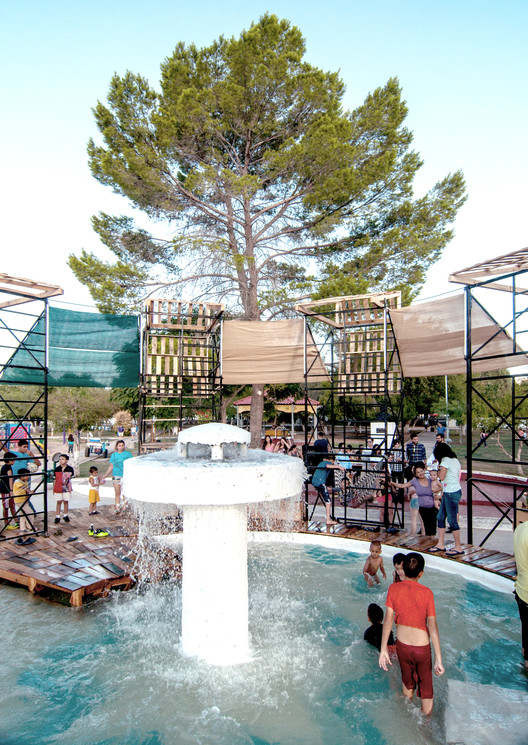 Following a week of designing, the students spent one week collaborating with neighbors and volunteers to construct the project out of “40 scaffolding units, several dozens of pallets, some remnants of shading mesh, and a few gallons of paint.” With the support of the city, the pump was fixed and filled with water, allowing for the project to come to life.

Urban SPA is composed of a base bathing deck, resting areas, steps, sun beds, small garden areas, small viewpoints, hammock-hanging fixtures, and a ramp that makes the installation accessible to all. “The water source vessel is then used as an improvised pool; it transforms the whole place by means of the generation of a micro-climate resulting from the combination of created shaded areas and moving water pouring from the newly reactivated source.”

With the installation of Urban SPA, the two separate sides of the park have once again been reconnected, additionally drawing in more participants for surrounding activities like afternoon Zumba and yoga classes, as well as customers for local kiosks.