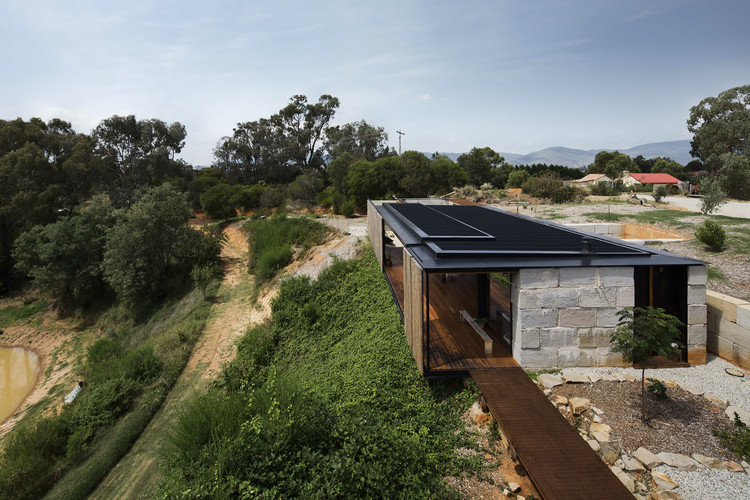 Text description provided by the architects. The Sawmill House uses large reclaimed one tonne blocks of reclaimed concrete which anchor it into the landscape and a dynamic active building envelope to regulate the internal environment. The dwelling is a hand crafted upgrade from an existing rather rustic, bohemian abode, befitting a regionally based sculptor.

Leveraging our client’s skill set was a priority. We facilitated this with a rough plan a year prior to the start of construction, then slowly developed the design whilst physically working with the client on-site for the duration of the build. This design/build approach allowed us to move away from conventional solutions and investigate highly bespoke yet cost effective alternatives. Large sections of the roof and facade could be mechanised, entire walls of glass could pivot, courtyards could be added, custom furniture, joinery and hardware could be design and manufactured on-site in realtime.  The knowledge gained through a hands on approach has been incredibly valuable to the development of our young practice.

The use of the reclaimed concrete blocks is an experiment in harnessing the thousands of tonnes of concrete that goes to waste each year. Each block is a by-product of excess concrete left in trucks from one or more projects in the region, poured into rough steel troughs. We have continued to investigate leveraging industrial by-products through a design studio we run at RMIT University and have pushed the concept to include the spacial and procedural by-product elements of practice.

What contribution does the design make to the lives of the inhabitants?

As explained by the client:

“The Sawmill House hosts our young family of three, who can now live comfortably and safely within the industrial zone. Large operable veranda, screens and doors transform the space to suit various climatic and social conditions, which is crucial to our family who must operate in a diverse and sometimes extreme climate, and direct our home through a spectrum of private retreat to communal hub. Importantly, the civic nature of the design allows the building to function as a design office with a fantastic aspect”.

Relationship of the built form to the context of the project.

Each of the one-tonne concrete blocks that form the perimeter of the dwelling’s walls has a story- a bridge, a footpath, a home; and create a patchwork of colour and texture across the facades.  This texture grounds the building in the site, as the layers of colour mimic the sedimentary layers of earth still exposed from the site’s former life as a gold mine before becoming the local sawmill. The untreated rough sawn macrocarpa screens reference the site’s recent history and over time as they pale to grey will settle the building into its perch on the quarry’s edge.

Comprised of 270 one-tonne concrete blocks, the project explores the possibility of positively leveraging the thousands of tonnes of concrete that go to waste each year in the building industry.

The concrete in each block is the by-product of the many residential slabs poured in the vicinity and were produced by the local concrete yard as a method of storing waste. In celebration of this patchwork of waste, blocks were kept raw and exposed as much as possible. While perhaps not a holistic answer, it is hoped that this approach creates a house that contributes to a broader conversation surrounding concrete reuse and encourages investment and investigation into this CO2 intensive assets.

The house has a highly operable envelope that takes advantage of the local breeze that travels up the valley towards the house, passively cooling in the summer months with crossflow ventilation. In the cooler months sun penetration is maximised by rolling back a 14 metre section of openable roof over the deck, allowing the sun to passively heat the dwelling for most of the year. 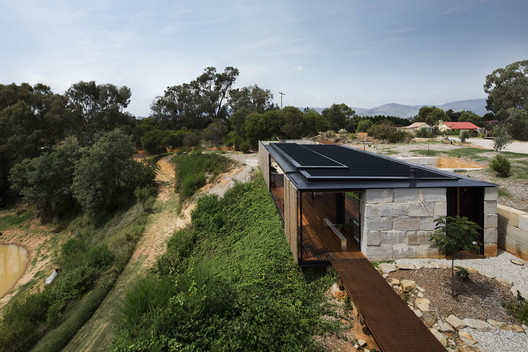